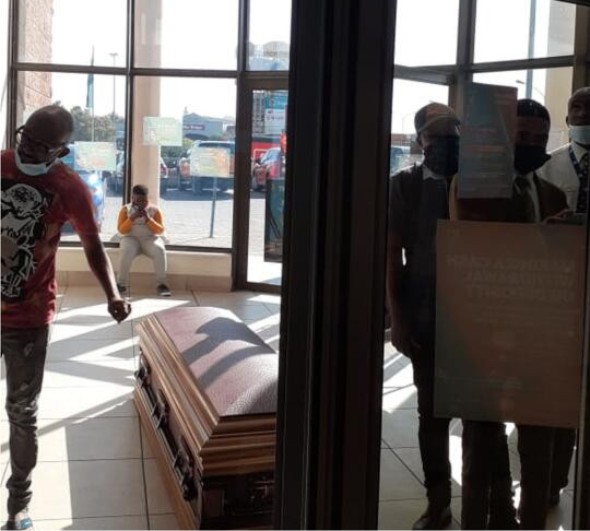 Bank customers were shocked when angry family members of a deceased man who died in a shanty fire in Galeshewe, Kimberly, South Africa on Friday, October 2, brought the body to the local bank after the bank did not pay out the funeral policy when it was expected.

According to one of the brother’s of the deceased, Thabo Tshite, they had no other option as they already had made arrangements to bury their brother.

“Our brother died in the fire at about 2am on Tuesday. We immediately reported his death and also informed the bank. Our 70-year-old father is the policy holder and he was told what documents were required for the claim,” said Tshite.

Tshite said they followed all the procedures and completed the necessary paperwork timeously in order for the claim to be processed.

“The bank told us they wanted police clearance and all other necessary documentation. We submitted all the necessary documents on the same day. The bank said the payout would be made between 24 and 48 hours. We were relieved as we made it clear to them that my brother died in a horrific manner and we wished to bury him as soon as possible,”

“We were thinking about the state of the body because he had burned beyond recognition. The bank seemed to understand our wish and said we would receive the payout. However, it is now more than 48 hours and the money still does not reflect in the bank account of our father.”

Tshite said he accompanied his elderly father when the policy was being processed.

“We came back to the bank on Friday morning. We spoke to someone from their head office telephonically and we were assured that the claim was successful and that the money would be paid out. We had made arrangements to bury our brother on Saturday, October 3.

“As the day progressed, my father informed me that the money still did not reflect in his account. I then called the branch and told them that we would come and leave the corpse in the bank should they fail to pay. We waited for several hours and I again called the bank just before 3pm. We were then told that the matter is being escalated to head office.

“I told the person on the other side of the line that we would bring my brother’s body to the bank and that they can bury him. We are ready to bury my brother and the bank wants to inform us a few hours before the funeral that we are not able to do so,” Tshite said.

Customers inside the bank took video footage with their cellphones as the brothers came in with the coffin and the deceased inside. Security personnel unsuccessfully tried to resolve the matter as customers looked on.

Staff at the bank tried to intervene and later told family members that they would call the regional manager to come and resolve the matter. Police also headed to the scene after they were informed about the matter.

As police and family members waited for the regional manager to arrive, they were told that the money would be deposited at 5 pm.

Another family member, Lebogang Mogodi, asked why the money would only be paid at 5pm.

“We had been waiting for the regional manager for so long, what would be so difficult to just make a transfer? These people want us to leave the building because they know the bank is now closed. Once we are outside, we will no longer get the money. We will wait until 5pm and only leave once we get a call from our father that the money had been paid into his account.

It was gathered that the matter was eventually resolved.