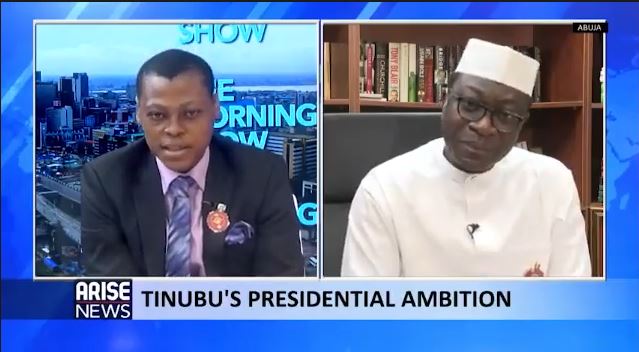 The Director-General of Bola Tinubu Support Management Council, Abdulmumin Jibrin got into a heated argument with Arise TV journalist, Oseni Rufai over the source of Tinubu’s wealth and real age.

While on live TV, the journalist had asked how Tinubu amassed so much wealth that “he could afford a bullion van” prior to an election at his home.

Responding to the question, Jibrin stated that emphasis should be on what Tinubu has achieved, how he turned around the revenue of Lagos and infrastructural development.

Again, he was asked ” how did Bola Tinubu make so much money that he had a bullion van in his home on election day. And how old is he?”

Mr Jibrin in his response said: “When you continue to repeat the question, you will get the same answer. These are all trash from the internet that people put together and we will not elevate such conversation.

“But when the campaign commences, we will bring out facts and figures before Nigerians but we will not create a narrative for them.”

When he was asked again, he questioned the journalist’s professionalism while asking the interviewer to “tolerate his response.” “I responded, if you don’t like the way I responded to it, you move on,” he said.

Mr Jibrin had earlier during the interview said being a good leader is not a function of age. He said;

Watch a video of the interview below.

Recall that on the eve of the 2019 general elections, viral pictures on social media showed two bullion vans driving into Tinubu’s residence.

Tinubu later admitted the bullion vans were conveying money to his house, but defended his action, saying he did nothing wrong because he was not a government official.