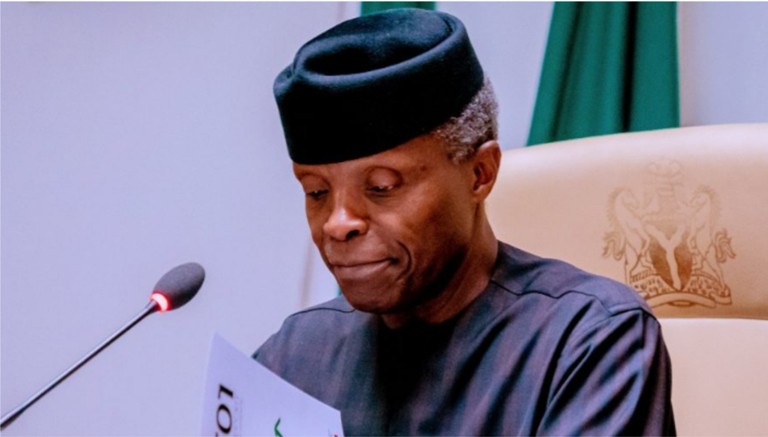 Nigeria’s number two citizen, Vice President Yemi Osinbajo has been linked to the building which collapsed days ago in Ikoyi, Lagos State.

The 21-Storey building located on Gerrard Road, Ikoyi, Lagos, collapsed n Monday, with a yet-to-be-ascertained number of people still trapped beneath the rubble.

A report from SaharaReporters, citing different sources, now claims that the property was bought by Prof Osinbajo from Chief Michael Ade-Ojo, founder of Elizade Motors (Elizade Nigeria Limited) shortly after he became the Vice President.

“Osinbajo is linked to the property, that house that collapsed on Monday in Lagos State. I was aware when he got the landed property from Elizade. A woman was selling food at the place before. That was where all the workers and labourers working around here ate,” a facility manager confirmed to SaharaReporters.

“The Vice President has a lot of properties in the area. He is using his brother to manage the properties. The developer, Femi Osibona, is only fronting for him. Osinbajo even bought another property for his brother in the area; it’s on Mosley Street. The brother is the one managing it personally. He comes there almost every time.

“If the Lagos State Government is serious, they should tell us who owns the land.”

The developer’s brother, Lanre Osibona, was Senior Special Assistant to the President on ICT from May 2015 to December 2019.

“I know he owns the land, but what are you expecting? So you expect a whole Vice President to put his name on such a project? Femi Osibona, Managing Director of Fourscore, is only a front in this project. The Vice President wanted the project to be finished before 2023, “another source said.

A staff member of the Lagos State Building Control Agency (LASBCA) told SaharaReporters that there ‘was an order from above not to visit the building during monitoring.

He wondered why the General Manager of the agency, Gbolahan Oki, was suspended and the Commissioner for Physical Planning and Urban Development, Dr. Idris Salako, was not punished.

“Why the GM? The man that just assumed office, what about the commissioner that passes through the road every day on his paper tiger monitoring? Let the governor suspend him and his PS as well,” he said.

“I know the building is owned by a top government official. The man in question, Osibona, was only fronting for that government official. We received an order from above to stop going to the site during monitoring. I heard the Vice President intervened when the project was sealed off early in the year, but I can’t say for sure. Maybe he is the owner. Don’t forget they are both from Ikenne in Ogun State.”

The collapsed property, which included four-bedroom maisonettes, flats, duplexes, and penthouses, was 65 percent sold out, according to Highbrow Living Magazine.

The price range for the apartment is also said to be between $1.2 million and $5 million.

“The 20-floor strictly residential facility is the brainchild of Fourscore Homes, evolving from a desire to build an original masterpiece. The concept is to have service flats in the three towers for residents to experience a stress-free lifestyle, complete with a hotel flair with a 360-degree view of Lagos state,” the magazine reads.

The structure was said to be 80 percent finished and was scheduled to be finished in 2022.

In an interview with THISDAY, Osibona had said the project was supposed to be the first of its kind in Nigeria.

“This development will give peace of mind and comfort to the residents because everything works,” he had said.

“I was one of the people whose real estate developments led to the growth of East London. I bought a house on New Cross Road and renovated it. I also bought a piece of land behind it and built two flats there, and that is what I will call my first real estate project. That was how I started building houses for sale.”

There have been controversies over the actual structure approved for construction after the building collapsed on Monday, leaving at least 22 people dead. Despite initial denials, the Lagos State Government said only approved the construction of 15 storeys for the collapsed building.

On Monday, Oki, the suspended general manager of LASBCA, claimed that the government had approved 15 floors for the 21-storey building.

“He got approval for a 15-storey building and he exceeded his limit. I am on the ground here and the materials he used are so inferior and terrible,” Oki had said.

But addressing journalists at the site of the collapsed building on Tuesday, Obafemi Hamzat, the Deputy Governor, said the owner of the building got approval for 21 floors.

He had said, “This particular one was approved for 21 floors, not 15. If you count, the second building was 14 or 15. The approval was done about three years ago. It is not something new. It is the construction that failed, apparently, from what we can see. ”

Hamzat also confirmed the earlier sealing of the building by the state government over poor construction.

He had added: “It was sealed from June. It was sealed because the agency came in to do a structural test, they saw some abnormalities, so they shut it down for those things to be corrected.

“They were taking corrective actions when this (collapse) happened.”

In a document obtained by SaharaReporters, however, it was revealed that only 15 floors were approved for the project.

It further said, “(a) The Planning Permit granted shall become invalid where development has (2) years of the grant of such permit unless the permit is revalidated by the Authority.

“(b) Every developer shall, on the procurement of his permit, proceed to the Lagos State Building Control Agency to give notice of his or her intention to commence development at Oba Akinjobi Way, Old Secretariat, GRA, Ikeja.

” The subject site shall be demarcated in accordance with the site plan and be made ready for development. (d) The developer must complete Form C at all stages of construction and submit the same to the Lagos State Building Control Agency (LASBCA).

” (e) Non-compliance with the approved planning permit as designed will void the permit, and the development will be regarded as illegal.

” (f) The developer shall engage the services of relevant registered professionals in the building’s construction and supervision and shall submit the professionals’ contact information to LABSCA. (g) A developer of any building above two (2) floors shall ensure his/her liability in respect of construction risks and submit a Certified True Copy (C.T.C) of such insurance policy certification with his/her Development Permit to LASBCA

” (h) The owner of the building shall not occupy or permit the same to be occupied before obtaining a certificate of fitness for habitation from the Lagos State Building Control Agency stating that the building is fit for human habitation.

“Failure to comply with any of the above conditions shall attract necessary sanctions on the building in line with the provisions of the extant law.”