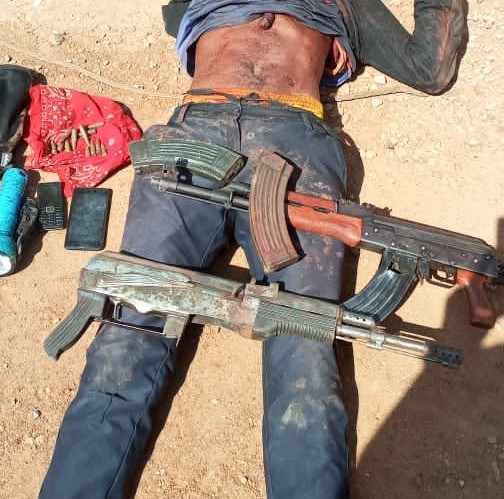 A police inspector has been killed while another officer was injured when gunmen attacked Unwana Divisional Headquarters in Afikpo North Local Government Area of Ebonyi State.

The yet to be identified gunmen numbering about 35 attacked the police station at about 3am on Sunday, October 24.

Spokesperson of the State Police Command, DSP Odah Loveth Obianuju, who confirmed the incident in a statement said one of the gunmen was shot dead during the ensuing gun battle, adding that the injured police inspector is responding to treatment in the hospital.

“At 0300hrs of today, 24th October 2021 yet to be identified gunmen suspected to be members of proscribed IPOB/ESN numbering about thirty-five (35) attacked Unwana Divisional Headquarters in Afikpo North Local Government Area of Ebonyi State, shooting sporadically at the policemen on duty, who immediately repelled the attackers,” the statement read.

“In the gun battle that ensued one (1) of the hoodlums was killed and two AK47 rifles/other incriminating items were recovered while others escaped with bullet wound injuries. Regrettably, one Police Inspector attached to the Division was fatally wounded while one other who is critically injured in responding to treatment in the hospital. The Police Facility/Operational vehicles are intact.

“Investigation revealed that the deceased suspect had been on the police wanted list for various attacks on police stations and one of the recovered AK-47 rifles has been identified to be the rifle stolen from Ohaukwu Police Division early this month.” the PPRO added.

Meanwhile, the Commissioner of Police in the state, CP Aliyu Garba has embarked on, an on the spot assessment of the Division and has also ordered a manhunt on the fleeing hoodlums.

The CP appeals to law-abiding citizens of the State to promptly volunteer useful information to unravel the true identity of the fleeing gang members.