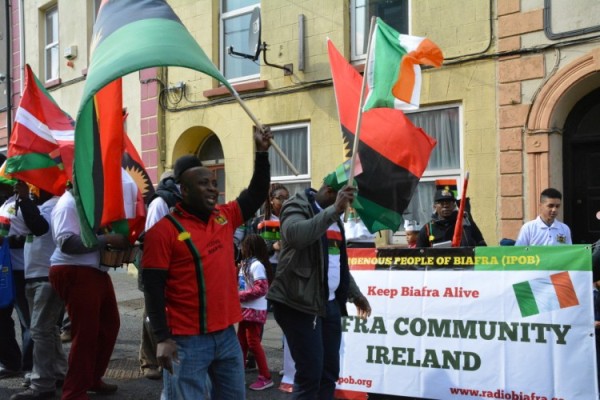 The members of the Indigenous People of Biafra (IPOB) have embarrassed another Nigeria politician at an event in Ireland.

The IPOB members had invaded the event organised recently by members of the Igbo Union in Ireland to fish out politicians who might travel from Nigeria to attend the event.

On getting to the venue, they confronted Mr Onwuneme Charles from Umuahia, Abia State, thinking that he is prominent Nigerian politician or a Traditional ruler.

From the video they shared, IPOB members were about to humiliate him the same they did to former deputy senate president, Ike Ekweremmadu in Nuremberg, Germany. However, things didn’t get out of hand quickly. Mr Onwuneme had the opportunity to address them.

What he said in Igbo language could be translated as below.

“I am happy with what you people doing. I fought during the Biafran War. My house was the centre for Voice of Biafra. A bunker that was used for VOA was on my land. Go and asked questions about me.

“You people should be organised to avoid a situation where others will consider you as mentally unstable or touts. All of you cannot be talking at the same time. One person can speak for all of you in a situation like this to avoid rowdiness.

“You are making a huge sacrifice in this fight. Not everyone can make this kind of sacrifice. There are people who would see the flag (Biafran flag) and they will hide. And, it is also not everyone who would come and speak to you the way I am doing now. I am a proud son of Igboland.”

At this point, many people started talking at the same time. They want to know if the man is a traditional ruler, a titled chief or a politician. One of them responded that he is not in such a position. Some of the IPOB members didn’t believe him. They felt he was lying to get off the hook.

The main person whose voice is heard talking in the video started calming the others down, saying that they heard that the traditional ruler of Abiriba (Eze Abiriba) was going to come. They had come because of him. Unfortunately, the Eze did not show up for the event.

They accused the Eze of Abiriba of killing IPOB members. They also claimed that the Igbo Union in Dublin made a complain to the Police against members of IPOB.

The organizers of the event, at this point, got intolerant with their interference and told them to leave the venue of the event. Police officers were also on ground to tell them calmly to leave.

They left the event, saying that they did not want to see any politician coming to Ireland to eat while Biafrans are being killed in Nigeria.