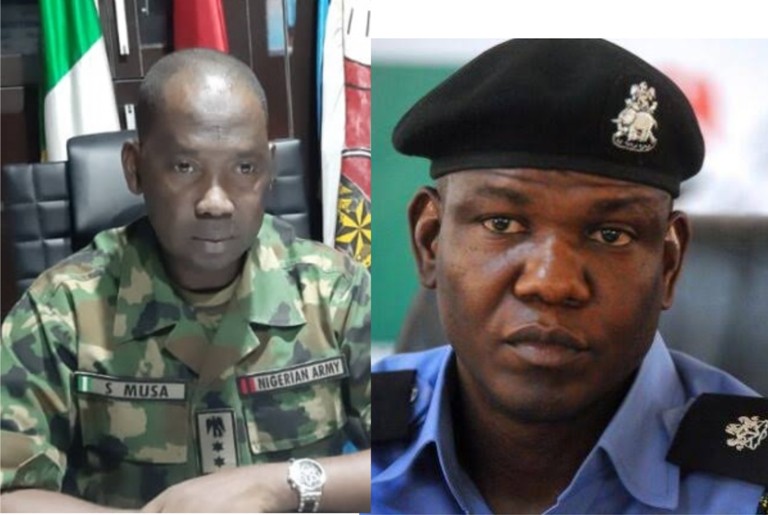 The Nigerian Police on Wednesday accused the Army of killing three policemen, one civilian and severely injuring other officers along Ibi-Jalingo Road, in Taraba state.

Police spokesperson, Frank Mba in a statement narrated that Felix Adolije, an assistant police superintendent, led the team of officers from the IG’s Intelligence Response Team (IRT) to the state to arrest a suspected kidnap kingpin whom the police identified as ‘Alhaji Hamisu.’

The police said they identified Mr Hamisu as a notorious kidnap kingpin who has been on the police wanted list for his alleged complicity in several high-profile kidnap cases, including the recent abduction of an oil dealer who paid N100 million to regain his freedom in Taraba State.

Mba went further to say the police officers “came under sudden attack and serious shooting by soldiers of the Nigerian Army,” while they were transporting Mr Hamisu to the Command Headquarters in Jalingo.

He further stated that the policemen came under attack “despite sufficient proof that they are police personnel on legitimate duty.”

“The soldiers thereafter released the handcuffed suspect, Alhaji Hamisu, who is now on the run,” he said.

The Nigerian Army in a response to the allegation, on Wednesday, offered explanation why the soldiers killed the three policemen later known to be on covert duties in Taraba State.

In a statement by the spokesman of the Nigerian Army, Colonel Sagir Musa, the army said IRT operatives refused to stop at three military checkpoints and then engaged the soldiers in a shootout.

Musa said some villagers had raised the alarm of kidnappers in an unmarked bus so, when the operatives refused to stop at the checkpoints, it resulted in the soldiers giving them a hot chase.

“On the unfortunate incident that occurred on the 6th of August 2019 in which troops of 93 Battalion Nigerian Army Takum pursued and exchanged fire with some suspected Kidnappers who indeed turned out to be an Intelligence Response Team from the Police Force Headquarters Abuja on a covert assignment from Abuja resulting in the death and injury of some members of the Team.

“On the 6th of August 2019, the said Nigerian Army troops, while responding to a distress call to rescue a kidnapped victim exchanged fire with the suspected kidnappers along Ibi-Wukari Road in Taraba State.

“The suspected kidnappers numbering about ten (10) and driving in a white bus with Reg No LAGOS MUS 564 EU refused to stop when they were halted by troops at three consecutive check points.

“The flagrant refusal of the suspected kidnappers to stop at the three checkpoints prompted a hot pursuit of the fleeing suspects by the troops.

“It was in this process that the suspected kidnappers who were obviously armed opened fire at the troops sporadically thus prompting them to return fire.

“In the resultant fire fight, four (4) suspects were shot and died on the spot while four (4) others sustained various degrees of gunshot wounds and 2 others reportedly missing.

“It was only after this avoidable outcome that one of the wounded suspects disclosed the fact that they were indeed Policemen dispatched from Nigerian Police, Force Headquarters, Abuja for a covert assignment.”