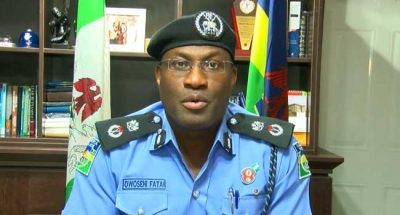 The police decided to take the step to prevent a foreseeable breakdown of law and order in the future. The Lagos State Police Command have said that they have received series of complain different quarters relating vandalisation of campaign posters, banners and billboards at night.

The most recent was complaints received  from Peoples Democratic Party (PDP) gubernatorial candidate, Jimi Agbaje. Agbaje alleged that no fewer than five persons, who were suspected staff members of Lagos State Signage and Advertisement Agency, LASAA, were arrested by residents of Gbagada for removing his posters.

Issuing the ban, the Police stressed that the office of the State Commissioner of Police, Edgal Imohimi, has been inundated with complaints of indiscriminate removal/destruction of campaign posters/billboards of political parties/aspirants by unknown persons.

The police alleged that those involved in campaign poster removal often embarked on the operation at odd hours, particularly between 1:00am and 4:00am.

In a statement signed by its Public Relation Officer, Chike Oti, the Police stressed:

“the trend, if not reversed, may lead to break down of law and order with its attendant consequences. Pasting of campaign posters /billboards and other advertisements, should be done during the day time, between the hours of 6:00am and 6:00pm only.”

“All political parties/candidates should approach LASAA for guidelines and approvals of their adverts. Also, LASAA officials should be accompanied by policemen when carrying out their enforcement/compliance duty.”

“All political parties/candidates/agents are to be guided by the contents of this press release in order not to run afoul of the law,” the statement concluded.

2 thoughts on “Police bans pasting of campaign posters at night”