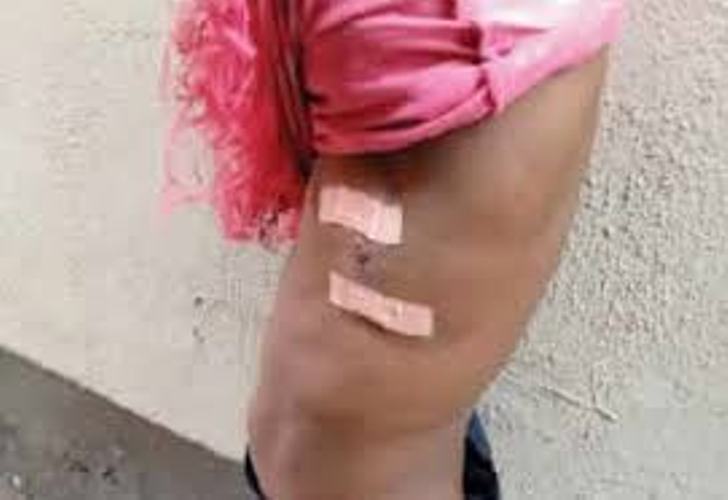 The wife of a reverend in the Oko-Oba area of Lagos State, Mrs Olusola Adeleke, has been arrested by the police for allegedly burning the skin of her house help with a hot iron.

The woman was arrested along with the reverend, Adebanjo, as the couple were alleged to have subjected the nine-year-old girl to series of physical abuse since she started living with them two years ago.

Sunday PUNCH learnt that the girl’s travails came to the limelight recently when one of the Adelekes’ two dogs bit her in the chest while she was feeding them.

It was said that the couple did not take her to hospital for treatment which prompted a mandated reporter to inform a child rights advocate, Mrs Toyin Taiwo-Ojo, about the case.

Taiwo-Ojo, a lawyer, told our correspondent that apart from the dog bites and mark of iron, there were scars of lashes all over the girl’s body.

She explained that she approached the reverend, who claimed his wife was playing with the victim when the hot iron burned her skin.

She said, “I asked him if the iron is a toy but he was speechless. The woman didn’t tell us what the girl did that warranted such inhumane treatment but the girl said she was punished for bedwetting.

“She said she is from Ajara (in Badagry). According to the girl, the couple lured her to their house two years ago through her mother’s friend. They told the mother that an elderly couple without a child needed somebody to keep them company and they promised to send her to school. That was why her mother released her to the couple

“We have been trying to reunite her with her family. She doesn’t know her surname; she only knows that her father was an Alhaji before he passed on. The suspects are pastors. They used horsewhips to beat the little girl who is about nine years old. There were scars all over her body from several previous beatings.”

Our correspondent learnt that the state’s Ministry of Youth and Social Development were involved in the matter and the suspects were arrested on Thursday and transferred to the gender unit of the state police command headquarters in Ikeja.

The lawyer said the victim while narrating her experience stated that the couple gave her tough chores to do, including tendering to Adeleke’s aged mother.

She said, “The malnourished child said she had been staying with the couple for the past two years without going to school. Her daily chores include changing the diaper and cleaning of a 90-year-old grandmother, who also resides in the place. She also feeds the two Alsatian dogs in the house and takes care of their kennel. A scar by her breast was a dog bite she sustained four days earlier but the reverend and his wife did not deem it fit to take her to a hospital for anti-rabies and anti-tetanus injections.”

The child rights activist stated further that the girl was taken to a hospital for treatment where a preliminary report revealed that she had been sexually abused.

“A medical test has been carried out on her and the result will be out on Monday. The girl has not revealed who did the dastardly act to her because of the trauma she had gone through. We are still waiting for the outcome of the police investigation to know the perpetrator,” she added.

The Police Public Relations Officer in the state, DSP Bala Elkana, confirmed the arrest of the couple.

He said, “Investigation on the case is ongoing and the suspects will be charged to court after the conclusion of investigation.”