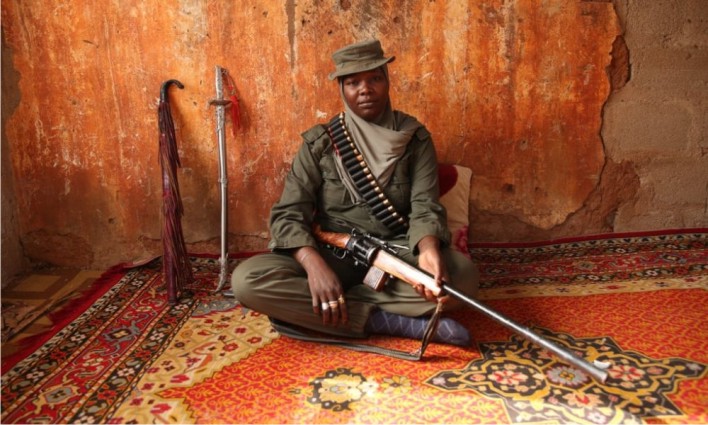 A woman named Aisha Bakari is being praised for her effort in the fight against Insurgency in Northern Nigerian.

In a documentary video which has been shared online, Aisha is said to be a warrior who specialises in hunting down Boko Haram members.

Back in 2018, seven women and four children were kidnapped and being taken deeper into Sambisa forest, Aisha Bakari Gombi received a call from the army commander asking her to assemble a group of hunters to track them down.

The 11 had vanished earlier that day after a group of Boko Haram militants attacked their village, Daggu. Three local people were shot dead and cars, houses and food stores

Aisha was said to have been raised and trained by her grandfather who is a hunter, near the Sambisa forest, where the extremists still operate despite a military offensive last year that destroyed many of their major camps.

She used to hunt for  animals, such as antelope, baboons and Guinea fowl with her grandfather, but now specialises in leading a team of men into the bush to hunt for Insurgents who may be lurking around her village.

According to her ” Boko Haram Fear Her”, adding that she protects her village from their intrusion.