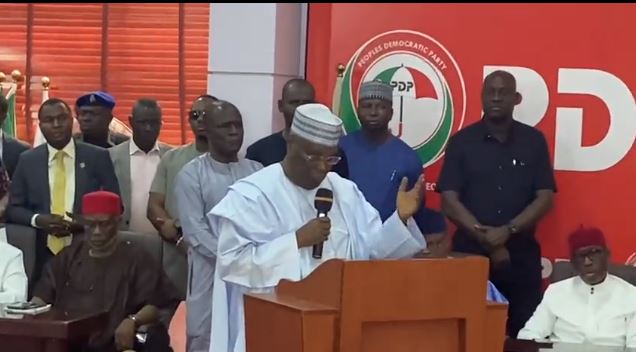 The Presidential candidate of the Peoples Democratic Party (PDP), Atiku Abubakar today announced the governor of Delta State, Ifeanyi Okowa as his running mate in the forthcoming general election.

Atiku made the announcement in front of party leaders and stakeholders in Abuja.

Watch the video below for the moment he made the announcement.

Mr Okowa was made the ultimate nominee despite earlier report that Governor Nyesom Wike of Rivers State had won when the stakeholders voted to recommend a VP.

Earlier, Mr Abubakar had announced Mr Okowa as his running mate in a tweet on Thursday morning.

“I am delighted to announce Governor @IAOkowa as my Vice Presidential candidate. I look forward to travelling our great country together, engaging with all Nigerians and building a shared future of peace, unity, and prosperity for all. As One We Can Get It Done,” he wrote.