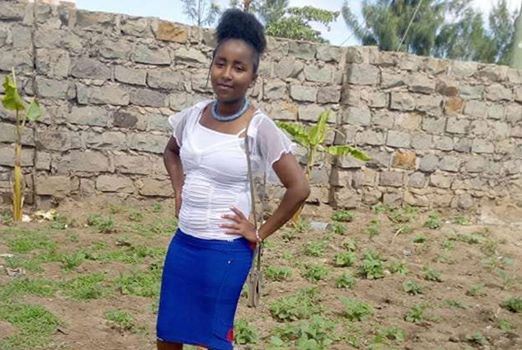 Police in Kenya are holding a 17-year-old boy who allegedly killed a girl, 16, for rejecting his sexual advances.

The Form 2 student, Valerian Njeri was stabbed more than 20 times by the teenage boy after she turned down his request for intimacy.

She was killed less than 100 metres from her family’s homestead at Mirera in the periphery of Naivasha town on Thursday, November 28.

Her innocent gesture to return a book earlier given out to her by a neighbour and friend she trusted turned fatal. According to police investigators, the assailant used the book to bait the unsuspecting girl and lured her into the house.

Valerie’s father John Ndonu is yet to come to terms with the death of his first-born child whom he described as the family’s beacon of hope.

“She was everything a parent wanted in a child. She was obedient and loved education. She wanted to become a doctor and was passionate about it,” said the mourning father.

She had scored 346 marks in the KCPE, laying bear her education prowess and secured admission at the prestigious Mary Leakey Girls’ School, and was set to join Form Three next year.

Her mother, Mary Goleti Chepleting, said she was a staunch Catholic. “We used to pray in turns whenever she was home,” she recalls.

On the fateful day, Mr Ndonu recalls reminding her daughter to complete her house chores as well as her holiday assignments.

“She promised to do so the same day and we agreed I would append my signature on the school diary as is the norm. That was the last time we spoke,” said Mr Ndonu, overcome with emotion.

Mr Ndonu said that after being informed that his daughter was missing, he rushed home with his wife and joined neighbours, friends and relatives in searching for the girl.

“After several hours of searching, we gave up and decided to continue with the mission later. The following day, a neighbour stumbled on her lifeless body right outside our compound,” he narrated.

According to police, the girl was found naked with over  20 stab wounds on her body.

The boy accused of killing Njeri had attempted to start a relationship with her but she flatly refused, Mr Ndonu added.

The local Nyumba Kumi chairman, Daniel Gichanga, is still pained by the incident that happened a stone’s throw away from his place of business.

“I even asked the teenager arrested for the killing to get me a glass of drinking water and he did it without exhibiting any emotions,” said Mr Gichanga.

He said the boy, a Form Three student at Nanyuki High School, used to lend his books to Njeri during school holidays.

“The teenager accosted the victim after she returned one of the books at around midday. After she turned down his advances to get intimate, he turned wild and stabbed her several times,” said Mr Gichanga.

Police said the suspect hid the body inside his room before dumping it outside the family’s compound at night.

The police are still piecing together information but DCIO boss Kenneth Njoroge said the boy is the prime suspect.

“Initial investigations indicate that the teenager is a key suspect. He is still being interrogated,” he said.

Her body was moved to Naivasha hospital mortuary where a post-mortem will be conducted.