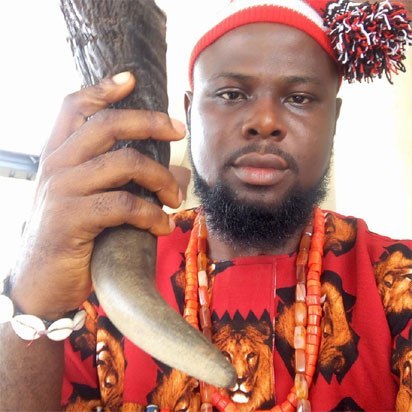 A vocal and radical traditionalist, Eziokwu Chineke Gaadi has warned movie industries to desist from further demonization of Igbo tradition, noting that Igbo ancestors are angry with them.

Disclosing this in a statement he personally sent to Vanguard, Eziokwu exposed the reason behind the untimely death of actors and actresses in the movie industry.

“I took out time to watch India films, American films, European films, Korea films etc and discovered that they do not pass demonic information about their race the way our African movie industries do.

“Movie industries should understand that people are already abandoning them for foreign movies. Igbo/African ancestors are angry.

“Their anger is what’s causing the untimely death of most influential actors in the industry. Some were struck with the world’s most dangerous sickness called cancer & Kidney infection. ‘Ndi ichie’ (ancestors), are angry with them”.

Explaining the effect on children, Eziokwu opined that the reinterpretation of polytheistic deities as evil, lying demons by movie industries has made children to believe that Igbo attires are evil due to how they are portrayed in the movie industries. It has made our children to be afraid of our attire, old men, village, custom, tradition and spirituality.

His words, “Move industries should stop demonizing Igbo/African Tradition, culture, customs & Spirituality so that they will stop losing actors untimely.

“Africans have their own tradition, culture, custom and spiritual lives before the advent of foreign religions. Movie industries should tell the true stories of African spirituality instead of demonizing them.

“Most movies pass allots of negative information’s about Igbo/African tradition. Don’t make a movie because you want to make money to condemn people’s tradition and culture.

“Movies have made people to believe that African tradition is all about human ritual and all kinds of evil. Children of nowadays through movies believed that Igbo attires are evil due to how they were portrayed in the movie industry.

“Movies have made our children to be afraid of our attire, our old men, our villages, our custom, tradition and spirituality.

“We demonize own culture and promote foreign culture in our movies. This is very sad indeed. Movie industries should know that our Ancestors (Ndi ichie ), will never allow them to go  free after denigrating them.

They have made the world to think that an average-rich Igbo man is a ritualist.

I call on every real traditional leaders and organizations to join hands to address this issue. Until African movie writers, actors, producers etc repent from demonizing African indigenous culture, then they will stop losing members untimely. Igbo tradition is not evil; it is our God and ancestral way of life.

“Government in their own wisdom constitutionally and legalize African Traditional religion, so I don’t know why movies that demonize people’s way of life should be approved for sale.