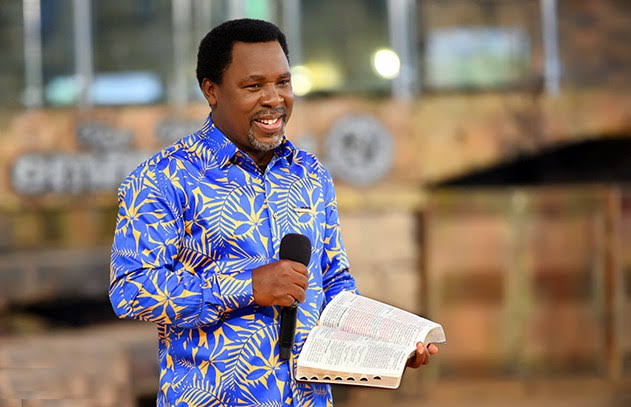 Founder of The Synagogue, Church of All Nations (SCOAN) Prophet TB Joshua passed away on Saturday June 5, 2021 at 57, days before his 58th birthday.

The news of his death was a shock to many. Even some members of his church are yet to accept that he has passed.

2. He was married to Evelyn Joshua and they had three children.

3. It was reportedly said that he stayed 15 months in his mother’s womb before he was given birth to.

5. He had only one year of secondary education before he left to work in a poultry farm.

6. While in school, he was known as ‘small pastor’ because of his love for the scriptures and gift to predict things that would happen in his community

7. He was also said to have been the leader of ‘Scripture Union’ while in school.

8. He had taught children at evening classes and done some menial jobs before he had a revelation to set up a ministry while on a 40-day fast.

9. In 1987, He founded the Synagogue, Church of All Nations under the bridge that links Ejigbo and Egbe in Lagos with just few members.

10. When the Synagogue church later grew to have large number of members within and outside Nigeria, Africa and Latin America, he established the Emmanuel TV television station from Lagos which has wide viewership especially as it is on cable TV.

11. He was a known philanthropist and noted for helping the needy and sponsoring persons.

13. Two members of his football club Sani Emmanuel and Ogenyi Onazi, played for the Golden Eaglets in the 2009 FIFA U-17 World Cup.

14. He sponsored three players of the club abroad to play professional football in Sweden.

15. The WBO International Light Middleweight boxing champion King, Davidson Emenogu had said that Joshua financially supported him throughout his career.

16. Forbes, in 2011, reported Joshua was the third-richest pastor in Nigeria with estimated net worth of between $10 million and $15 million.

17. Wikipedia documented his social media presence to be massive with no fewer than 3.5 million fans on Facebook.

18. “His YouTube channel, Emmanuel TV, has over one million YouTube subscribers. He was the world’s most viewed Christian ministry on the platform before it was suspended.

19. He was described as the “Oprah of Evangelism” and “YouTube’s most popular Pastor”.

21. A Forbes blogger said that it was estimated that Joshua spent $20 million on “education, healthcare and rehabilitation programmes for former Niger Delta militants”

22. The Nigerian government in recognition of his humanitarian activities, gave him a National Honour, Officer of the Order of the Federal Republic (OFR) in 2008.

23. In Ecuador, he funded the rebuilding of a rural school destroyed during the earthquake.