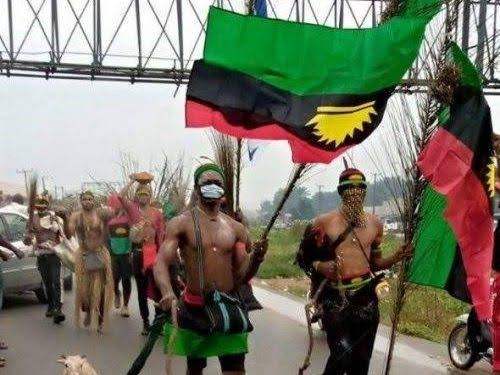 The clash between unknown gunmen and members of the Indigenous People of Biafra (IPOB) on Friday has led to the death of five persons in Ihiala, Anambra State.

An eye witness who saw the Hilux van carrying the bodies of the gunmen out of the town said people hailed the IPOB operatives who were shooting in the air as they drove towards the Onitsha-Owerri expressway.

The eye witness said: “It is true. The incident happened at Akwa village in Ihiala during a clash between IPOB and unknown gunmen.“

The gunmen have a camp at a place called Oseakwa from where they have been terrorizing Ihiala, Okija, Uli and other neighbouring communities.

“For some time, the gunmen have been disrupting burials and demanding to be settled before any ceremony is organized. They are also the group that has been kidnapping people and snatching cars.

“On June 17, IPOB swooped on the gunmen in their camp and five people were killed during the shootout. IPOB operatives loaded the corpses in a Hilux van and paraded them around the villages.”

Also on Friday, some people suspected to be members of Ebubeagu clashed with gunmen at Ihiala during a burial ceremony, although no lives were lost.

According to the eye witness, following the clash, the burial had to be cancelled and the corpse returned to the mortuary.

He said: “It was terrible. What happened was that one Ekene who is a businessman in Ihiala was burying his late brother and his in laws from Imo State came with members of Ebubeagu to protect them, only to be confronted by people who said they are unknown gunmen in charge of Ihiala.

“The argument of the gunmen was that Ebubeagu people ought not to enter Anambra State when there are people controlling the area.

” The incident happened at the village called Umuojimaka in Akwa and when the shooting became so much, the family took back the corpse to the mortuary. No new date has been fixed for the burial.”

Only recently in the same Ihiala, some hoodlums set ablaze a mansion close to Aforigwe market in Ubahuekwem village for allegedly inviting the police after the man had paid the gunmen to provide security for him during a ceremony in his compound.

Meanwhile, the Anambra State Police Public Relations Officer, PPRO, Mr Tochukwu Ikenga has said he was yet to receive a report about the recent incident.