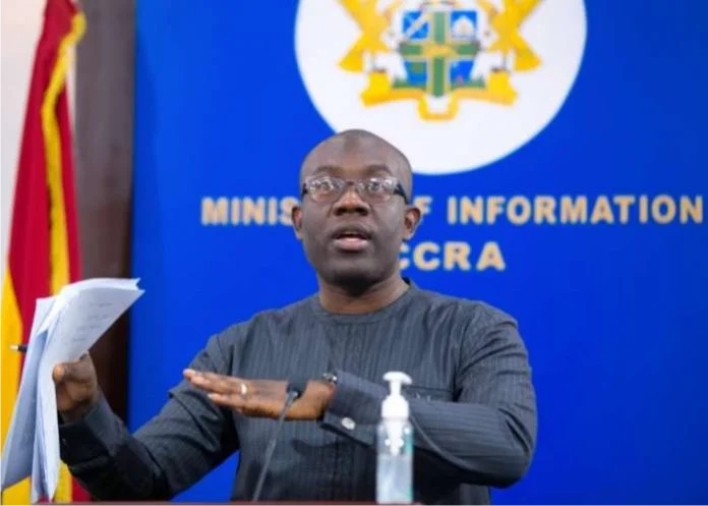 Kojo Nkrumah, Ghanaian Minister of Information, on Sunday, defended the $1m trade levy and other regulations imposed on Nigerian traders in Ghana, noting that Nigeria had equally issued executive orders preventing foreigners from getting jobs which Nigerians can do.

The minister said it was astonishing that Ghanaian laws could be described as outrageous, noting that it was on record that Nigeria had taken a number of steps in pursuit of its national interests.

He cited the closure of the Seme-Krake borders since August 2019 as part of steps taken by the Federal Government, which he said had affected the neighbouring countries.

Nkrumah stated this in reaction to a statement by the Minister of Information and Culture, Lai Mohammed, that the Federal Government would no longer condone the reported harassment of Nigerians in the former Gold Coast.

Mohammed had in his statement on Friday listed various acts of aggression against Nigeria and its citizens by the Ghanaian authorities, including the takeover of some Nigerian diplomatic properties, discriminatory deportation of 825 Nigerians within one year and harsh jail sentences on Nigerians.

But Nkrumah said contrary to Mohammed’s claims that 825 Nigerians were deported between January 2018 and February 2019, only 700 Nigerians involved in fraud, prostitution, and armed robbery were deported from Ghana.

Nkrumah stated, “The Federal Republic (Nigeria), on the other hand, is on record to have taken a number of steps in recent months, in pursuit of her national interests, which have gravely affected other countries in the region.

“These include the closure of Nigeria’s Seme-Krake border from August 2019 to date and the issuance of executive orders by Nigeria’s Presidency preventing foreigners from getting jobs which Nigerians can do, to mention a few.”

The minister assured that the Ghanaian President, Nana Akufo-Addo, would engage with Nigeria’s President Muhammadu Buhari and develop a framework for validating the claims of ill-treatment of citizens of either country and ensure they enjoy the full exercise of their rights while respecting the sovereignty and laws of both countries.

Nkrumah said his counterpart’s assertion on the alleged seizure of Nigerian Mission property located at No. 10, Barnes Road, Accra, was incorrect, noting that the land was acquired by Nigeria from a private citizen, Thomas Hardy, on October 23, 1959.

The minister explained that the commercial lease on the land expired 46 years ago without any evidence of renewal by the Nigerian High Commission in Ghana.

On the high residency permit levies, including the $120 for COVID-19 test imposed by the authorities, Nkrumah stated that this applied to all foreigners and not just Nigerians.

Speaking on the closure of over 1,000 shops belonging to Nigerians over non-payment of the $1m trade levy, the information minister stated, “The compliance exercises conducted in the selected markets revealed gross violations of retail trade laws and regulations by Ghanaians and foreigners, including Nigerians.

In separate letters to Buhari; Foreign Affairs Minister, Geoffrey Onyeama and Lai Mohammed, Obiano said Ghana was not being fair to Nigerians, given the major role that the late Dr Nnamdi Azikiwe, played “in reshaping the history and destiny of Ghana.”

In one of the letters made available to newsmen in Awka, the Anambra State by the state Commissioner for Information and Public Enlightenment, C-Don Adinuba, Obiano said, “After all, it was the Great Zik of Africa (Nnamdi Azikiwe) who, as Editor-in-Chief of The African Morning Post in Accra in the 1940s, discovered the promising and intelligent young man known as Kwame Nkrumah and encouraged him to travel to the United States for further education and even secured admission for the young man in Zik’s alma mater, Storer College in Philadelphia.

“The Anambra State government notes that it will be a profoundly sad development if Ghanaians create the impression that non-Africans are welcome to their country but not fellow blacks and Africans.”