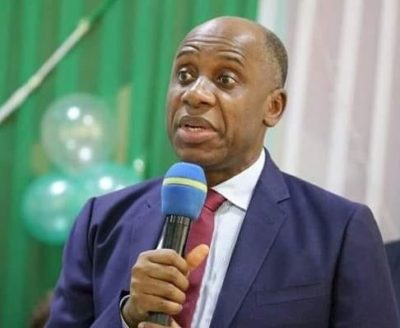 Minister of Transportation, Rotimi Amaechi has stated that he and leaders of other political parties need to beg for forgiveness from the people of Rivers State over the pains they’ve lately suffered.

Amaechi, a former governor of the state, pointed out that the state is now always in the news and almost always for the wrong reasons.

He made this known in his Easter message to the people whom he urged to have hope and renewed commitment.

No doubt, our state has endured a tortuous political season, which saw political parties jostle and cajole Rivers people to make choices.

Our state, which was known and respected as the Treasure Base of the Nation, is now almost always in the news for the wrong reasons. This is not the Rivers State of our dreams.

We must find our way back to the path of a glorious future. I am one of you, therefore, as your father, son and brother, I beseech you to be of good courage and join hands to build and restore the glory of our state.

He went further to say:

For us as Rivers people, this is a moment for sober reflection and forgiveness.

I will not hesitate to implore that we all ask God for forgiveness and mercy for all the things done or left undone and from the citizens for the pain and anguish that they have brazenly suffered, which most times are unreported.

The persistence of gang violence, kidnappings and killings in parts of the state has dealt a telling blow on the psyche of the people. People no longer feel safe or sleep with their two eyes closed.”