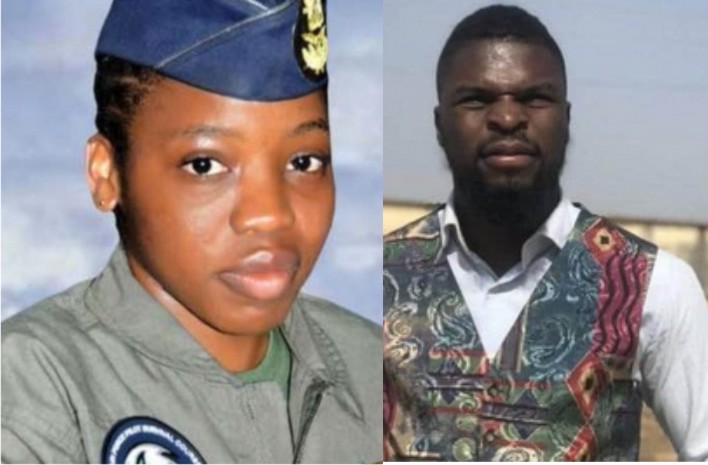 However, two other suspects also arrested in connection with the Air officer’s death, were set free by the Kaduna State Magistrate Court 1.

The police noted that there is no premeditation in the death of Arotile, when the case came up on Thursday August 20. The prosecution, Counsel DSP Martins D. Leo prayed the Court to discharge the 2nd and 3rd suspects, Folorunsho Igbekele Faith and Gbayegun Deji as their investigation did not find them wanting.

A legal advice from the Director of Public Prosecution, Bayero Dari Esq which was read out in court revealed that there is sufficient evidence to prosecute the 1st suspect, Nehemiah Adejor for culpable homicide not punishable with death.

“On the 14 day of July, 2020′ the suspect all male of Auta Alkali Farin Gida, Mando Kaduna inside a Kia Sorento with Registration. No AZ 478 MKA Kaduna being driven by the 1st suspect sited the deceased (NAF/4512F Flying officer Tolulope Arotile) at NAF Base Kawo, Kaduna, whom they identified as their school mate at Air force Secondary school, Kaduna.

“The 1st suspect, full of enthusiasm, recklessly reversed the car in order to meet the deceased and in the process ran over her consequent upon which the deceased lay unconsciously on the ground. The deceased was rushed to NAFX64 Base Hospitàl-for- medical attention but was later pronounced dead by the medical Doctors at the Hospital.

“The suspects were arrested and taken to 461 NAF Hospital Kaduna for toxicology test and results were all negative. They were later transferred to the State Criminal Investigation and Intelligence Department, Kaduna on the 24th day of July, 2020 for further discreet investigation.

“Police investigation reveals that all the suspects attended the same secondary school with the deceased and upon sighting her the 1st suspect recklessly reversed the car and eventually ran over the deceased which led to her untimely death.

“The 1st suspect admitted in his cautionary statement that on the 14th day of July, 2020 he was together with the two other suspects in a car KIA Sorento he was driving, when he saw the deceased walking along the roadside of the Air force Base.

“He informed the other suspects who screamed enthusiastically after which he stopped and started reversing the car in order to meet the deceased and exchange pleasantries. In the process of which he mistakenly ran over her and she later died. He denied having any premeditated plan to kill her.

“The 2nd suspect also stated in his cautionary statement that on the fateful day he along with the 1st and 3rd suspect went on hangout and on their way back the 1st suspect cited the deceased whom they later saw and became extensively happy. That the 1st suspect stopped the car and began to reverse same in order to meet up with the deceased and exchange greetings since they have not met a long time.

“That when he noticed the 1st suspect was driving speedily off the road he cautioned him, but unfortunately he got confused and ran over the deceased. He out rightly denied any arrangement to cause the death of the deceased.

“He added that being a trained nurse he assisted in resuscitating the deceased at the hospital but all attempt proved abortive until she was pronounced clinically dead.

“In his cautionary statement, the 3rd suspect corroborated the statement of the 2nd suspect in all material particulars as to the events of the 14th day of July, 2020, as it relates to the death of Flying Officer Tolutope Arotile at NAF Base Kaduna.

“It is clear also from the investigation done; the 2nd and 3rd suspects were passengers and friends of the 1st suspect who was driving the vehicle.

“From the foregoing there is sufficient evidence to prosecute the 1st suspect for the offence of Culpable Homicide not punishable with death contrary to Section 191 of the Kaduna State Penal Code Law, 2017 as there is no premeditation in the death of the deceased.

“There is however insufficient evidence against the 2nd and 3rd suspects as the entire investigation did not disclose any offence against them other than being passengers in the vehicle of the 1st suspect.

“To prosecute them therefore will be embarking on an evidential conjuncture totally unknown to our Criminal Justice System, they can be discharged accordingly pursuant to Section 125 (6) (e) of the Kaduna State Administration of Criminal Justice Law, 2017 and thereafter be used as prosecution witnesses in the trial of the 1st suspect.”

It was further learnt that Nehemiah Adejor is going to be arraigned at the State High Court for culpable homicide not punishable with death on the 3rd of September, 2020.