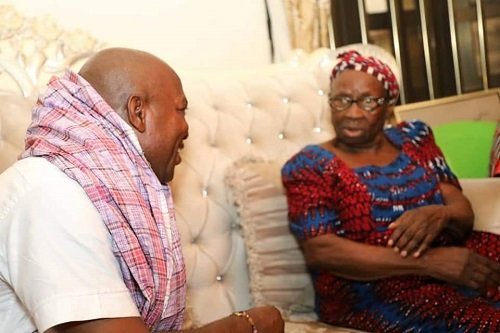 The intriguing political developments in Bayelsa took an unexpected turn on Wednesday, November 6, when Madam Ayi, mother of the immediate past president, Goodluck Jonathan, reportedly prayed for the candidate of the All Progressives Congress (APC), David Lyon.

Daily Trust reports that Madam Ayi prayed for Lyon to become victorious in the election scheduled for November 16.

It was learnt that Lyon paid the former president’s mother an unscheduled visit while leading his campaign train to Otuoke area of the state.

The APC governorship candidate used the opportunity to promise an end to the many challenges facing the state once he is elected governor.

He later addressed a crowd which gathered to hear his manifesto ahead of the election. In his address, Lyon said he was not happy with the way the water project in Ogbia local government was abandoned. He promised to reactivate of the project if he eventually gets the mandate of the people.

Lyon further promised to re-energise the Imirigi gas turbine which would give the state 24-hour electricity supply.

“They have kept you poor and have concluded that you can be easily bought during election.

“If they give you money, collect it and vote them out. When I become governor, I will ensure judicious use of the state’s resources and optimum development of Bayelsa state,” the candidate told the crowd.