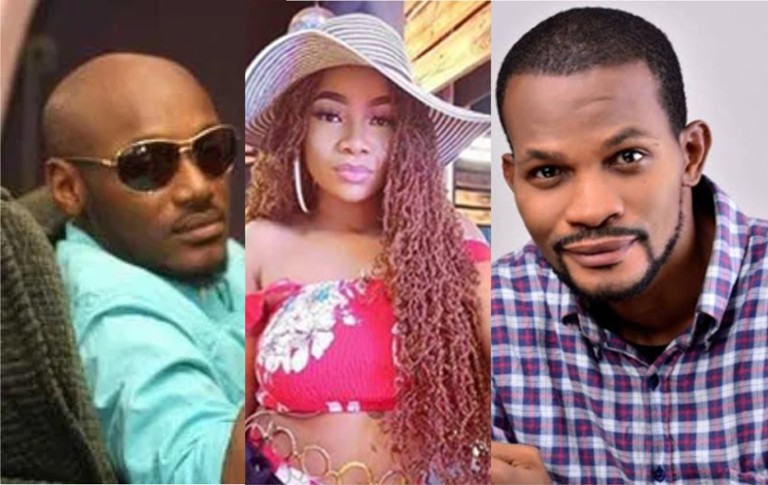 Recall that the singer paid a surprised visit to the housemates of BBNaija last week. Afterwards, a video clip surfaced online which captured the moment Tacha ‘snubbed’ 2Baba by not taking his handshake.

While some people have condemned Tacha for the behaviour, others have come to her defense, saying that she probably didn’t see the singer’s hand and didn’t snub him. Her fans also shared a video later where Tacha was singing 2Baba’s song to the entertainment of the singer and everyone around.

Uche Maduagwu, in reaction to the video, said Tacha needs to get a bag to start packing her things from the house for allegedly disrespecting the singer during his visit to the show.

“@official2baba is not your age mate, Nigerians will not give you their votes again for the way you allegedly snubbed a legend… Dear #Tacha, if you have any #Ghana must go bag in #BBnaija2019, use it to pack your load, because #PepperDem is not a place for people who allegedly snub #music legends. Is it not in this same SHOW that an Ex #BBnaija housemate allegedly once said she does not know #BankyW?

“Did Nigerians not vote her out of BBnaija with all her #beautiful GIFT of drama? I laughed uncontrollably when some people open their mouth and say she did it unintentionally, abeg, if an Ex BBnaija housemate can allegedly say she makes 5 million Naira a day, why should we ever take these #girls seriously?

“#Ok, look at the super story Gedoni and #Khafi came out of BBnaija with, that they did not do anything together in BBnaija, abeg, were they praying or reading the bible that night? This nonsense has got to stop, why should anyone allegedly snub #2baba handshake on National #television? Did she allegedly do it to TREND or disgrace 2baba?  #repost #instagram #Lagos #Nollywood #FollowMe #instagood #Abuja #Ibadan #pics #YorubaMovie #blog #share #follow #instapic #model”