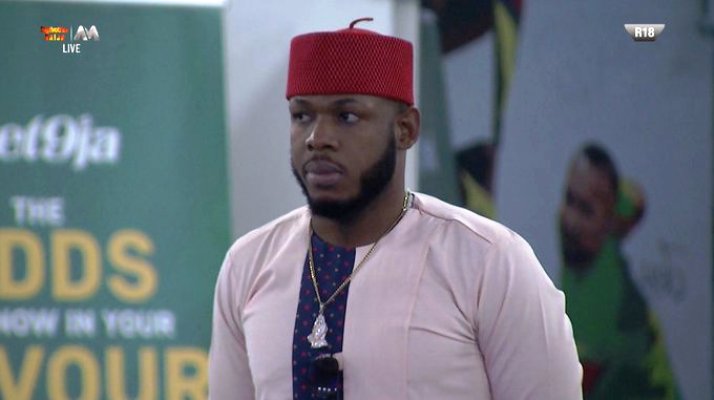 During the challenge which began on Sunday, 15th September, the Housemates were told to pick random photos. The winner of the challenge would be the one who picks the photos that matches the photo on the much guarded Red Box.

On Sunday, September 22, 2019, Biggie gave Elozonam, the Head of House, the permission to open the box during the 12th Sunday Live eviction show.

One of the pictures picked by Frodd matched the picture in the red box, which has been jealously guarded by all the 10 remaining housemates.

Frodd got the 200 Bet9ja coins for winning the game and his teammates, Omashola, Tacha, and Cindy also got bonus coins.

Frodd may have missed the opportunity to buy Immunity but his luck game got stronger, as he got the Ultimate Veto Power.

Since Sunday, June 30th, when the BBNaija 2019 Pepper Dem began over 8 housemates winning the Veto Power challenge so far. – with Seyi winning twice.

Reacting after his photo matched the one in the box, Frodd shouted: “Thank you, Jesus,” adding: “I’m spiritual, I have always known this picture was the one” (pointing to the picture he picked).