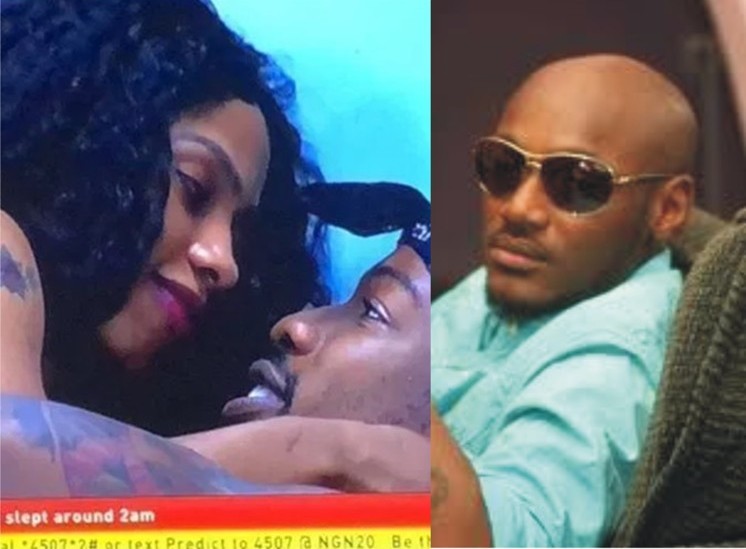 Music legend, Innocent Idibia (aka 2Baba or 2Face) paid a surprise visit to the housemates of the ongoing BBNaija season four. The ‘African Queen’ singer stormed the house with Larry Gaaga and Efe Omoregbe.

The housemates, who did not see the surprise coming, got to celebrate 2baba’s birthday with him as Biggie set up the party in the arena, complete with food and musical performances.

Prior to the party, housemates took turns to ask the legend questions about the industry and success tips that every celebrity should have.

He said, “Keep your head straight. Respect people, respect your craft. Develop yourself. There is no limit to what you can do.”

Frodd asked how he kept calm despite the pressure before a performance. He said, “You have to keep your game face on. You have to block it out. You have to go out and satisfy your fans.”

After housemates chorused a happy birthday song for him and cut the cake, also had karaoke games with Seyi, Tacha, Omashola and Cindy creating funny moments.

The fight between Tacha and Diane

It all started after Diane left the Veto power box at the arena games after 2Baba’s performance.

Biggie had on Monday given the housemates a red box to protect throughout the week. He warned that housemates will serve punishment if the red box goes missing. But Diane, who was in charge of the box on Thursday night left it behind at the arena, stirring angry reactions from housemates.

Tacha who couldn’t control her temper lashed at Diane and accused her of getting drunk and forgetting the box. Elozonam also got caught up in the heated argument as you can see in the video below.

Finally, the attention of viewers of the BBNaija show was caught when, last night, Mercy began to moan sensually while an activity was going on under the duvet which she and Ike were under.

After seeing the video below, viewers concluded that they had sex last night.

Tacha snubbing 2Baba during his visit also trended and below is the video.

However, from the video below, Tacha is seen rocking the mic to the entertainment of 2Baba and everyone. It might be that the snubbing was an unintentional incident blown out of proportion.