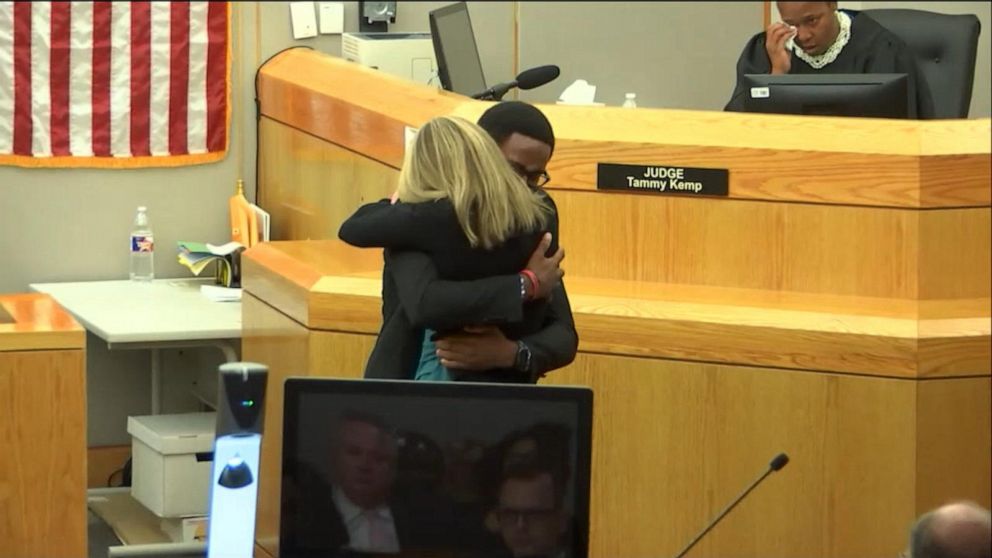 Botham Jean’s brother, Brandt Jean was honoured with an award for his courage in forgiving and hugging his brother’s killer, Amber Guyger after her sentencing.

The Institute for Law Enforcement presented 18-year-old Brandt Jean with its 2019 Ethical Courage Award in Texas. It honors the empathy and forgiveness he showed the former Dallas Police Officer who killed his brother while he was in his home watching TV.

Jean testified at Amber Guyger’s sentencing hearing after she was convicted of murdering his brother in his own apartment. He said he loved her and did not want her to go to jail.

However, Guyger was sentenced to ten years in prison after claiming she thought she was in her own home at the time and thought Botham Jean was a Burglar.

Accepting the award on Tuesday, November 3, Brandt Jean used the opportunity to tell the police they could do better.

He said: “I want you all to know that I am not a threat, that young black males are not inherently dangerous or criminal. I implore you to champion policies and procedures that amplify the value of all lives. I insist that you encourage diverse leadership that can model inclusion and restraint.

“Most importantly, I ask that you remember my brother. And when you remember him, I want you to ask yourself what are you doing to ensure there will be no other families like mine — no other little brothers that have to model ethical leadership in forgiveness of a cop whose lack of training and discipline caused them to carelessly take the life of another.”

Gregory Smith, director of the Institute for Law Enforcement Administration, said he was honored to present the award to Jean for his ethics and integrity.

“Brandt Jean represents the best in us,” Smith said. “Despite an unimaginable loss, he saw the humanity in the person responsible for his brother’s death. He saw her pain and regret, and had the ability to show empathy, caring and forgiveness.”