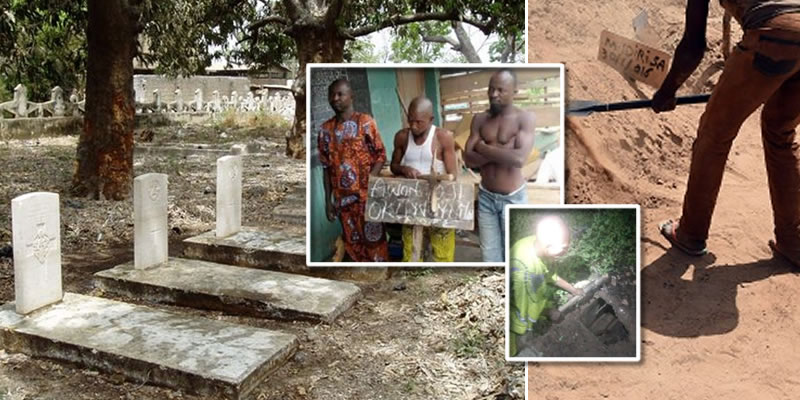 A Notorious ritualist, Kunle Adewunmi, an alleged specialist in breaking into cemeteries to steal human body parts, and his two accomplices have been arrested in Abeokuta, Ogun State.

The ‘night walker’ who is a Bricklayer during the day  was arrested penultimate Saturday after allegedly stealing human body parts from no fewer than 35 tombs in recent times.

It was said that nemesis caught up with the trio while they were digging up graves at a cemetery belonging to a parish of the Methodist Church at  Ogbe, Abeokuta.

They were said to have been sighted by a female member of the Odua People’s Congress (OPC), who was attracted to the scene by the loud sound of diggers used by the suspects.

The woman, sources said, raised the alarm which attracted other OPC members in the area who apprehended the suspects.

Members of the church were said to have identified Adewunmi as the bricklayer usually hired to plaster graves after burial of bodies at the graveyard.

‘’The bricklayer is very known to the church members. He is the one usually contracted to plaster tombs inside the cemetery and took advantage of that to carry out his nefarious act at the cemetery.’’

The suspects were handed over to the Ibara Police Division, where the suspects allegedly mentioned a trader at the Itoku market as receiver of human parts stolen from the graveyard.

Meanwhile, the suspects have since been arraigned before an Isabo Magistrate’s Court, Abeokuta, and granted bail in the sum of N200, 000 each.

A source however said only one of the suspects had been able to perfect his bail at press time.