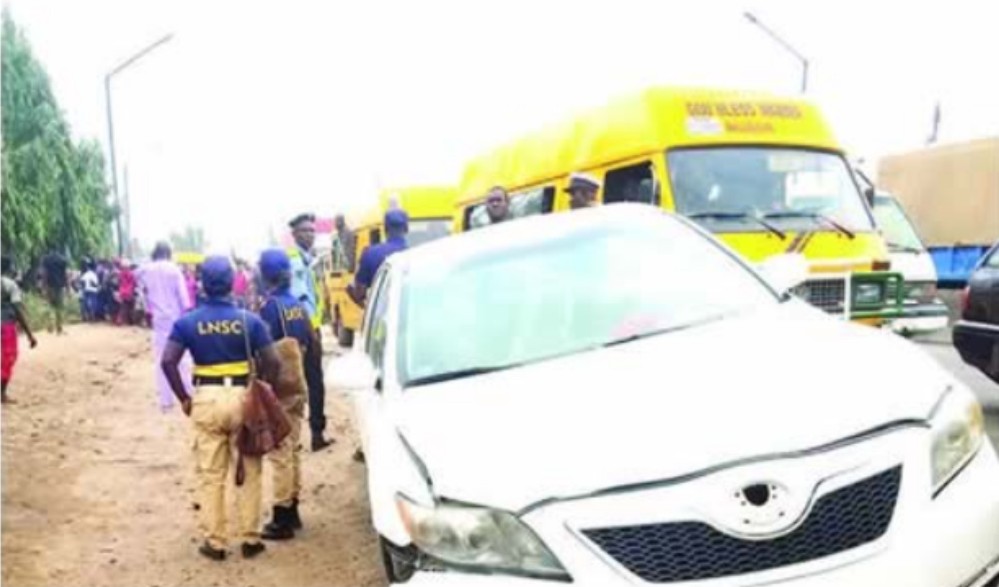 A businessman, Tosin Salako, has crushed a property agent, Akinola Ademola, to death in the Kola area of the Ifako-Ojokoro Local Council Development Area of Lagos State, off the Lagos-Abeokuta Expressway.

PUNCH Metro reported that tragedy struck when the 45-year-old Salako, who drove a Camry car with number plate MUS 335 FJ, lost control of the vehicle while struggling for space with a Toyota Highlander SUV around 3pm last week Wednesday.

While passersby gathered to mourn the tragic death of Akinola, they condemned Salako’s driving.

It was gathered that Salako had been arrested by the Lagos State Police Command.

An eyewitness, Stephen Ubam, said the accident occurred due to excessive speeding, adding that Salako lost control when the car entered into potholes on the road.

The Anambra State indigene said, “I was coming from my house located at No. 3 Adeniyi Street, beside the Zenith Bank, Kola bus stop, Agbado-Ijaiye, Lagos. I crossed to the other side and  I saw that the driver (Salako) was on top speed struggling with the driver of the Highlander SUV for the lane.

“The way he was driving showed that he did not know much about the road, because he was just entering the potholes. All of a sudden, he entered one of the potholes, lost control of the car, and crushed the man (Akinola), who was by the roadside.

“The man died instantly. So, we took his damaged phone, removed the SIM card and inserted it into my phone and called his wife. When she got to the scene, she was shocked. While crying, she explained that her husband came to her shop and was on his way to withdraw money from the Zenith Bank when he got knocked down. We were also able to call his brother.”

The younger said, “When the people, who witnessed the accident, called me that my brother had been killed, I quickly rushed down there and seeing his corpse lying on the floor was really painful. It was that white Camry car driver who killed him.

“I have contacted our relatives and we are saddened by the news of his death. We are on our way to bury him today (Tuesday).

When contacted, the state’s Police Public Relations Officer, DSP Bala Elkana, said police personnel, who were mobilised to the scene of the accident after the command received a distress call, arrested Salako and impounded his car.

“When we received the distress call about the accident, we deployed our traffic personnel in the scene of the accident and they cleared the obstruction on the road, arrested the suspect and impounded the vehicle for inspection. The corpse has been evacuated and investigation is ongoing,” Elkana stated.