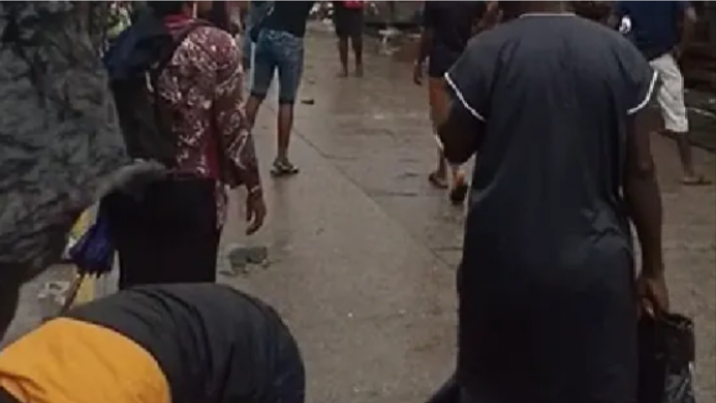 Unknown men suspected to be hoodlums have allegedly stabbed the Chief Priest of the Igbudu community in Warri South council area of Delta, Victor Alawuru to death for allegedly impregnating a Muslim lady at Degbori Street in the Hausa Quarters axis of the community.

Reports gathered revealed that the chief priest impregnated a ‘Hausa lady’ which angered her Muslim parents who were against the relationship because on religious differences.

Some residents in the locality claim that the deceased was killed because he rejected the pregnancy.

The report claimed that the deceased had gone for a festival on Degbori street when he was ambushed and stabbed by hoodlums reportedly from the Hausa enclave.

A source told newsmen that “the deceased was killed because a Hausa lady got pregnant for him. He allegedly rejected the pregnancy. The incident has brought serious tension,”.

“the hoodlums who are believed to be from the Hausa community attacked and stabbed him to death on Thursday. The Igbudu community youths are angry over the death of the deceased. Thus, fighting, robbery, and a riot broke out between the Urhobo and Hausa groups.

The ever-busy Igbudu market was forcefully closed on Friday evening as traders ran away for the safety of their lives. And there are fears that the youths may avenge the death of the chief priest.

The incident is a bad one because cult groups have taken over the fight. The last person that was killed by the same group during the lockdown was the younger brother of Mr. Victor. The people of the priest are angry”.

A senior police source at the Warri Area Command revealed that the parents wanted the girl to terminate the pregnancy but she refused.

“They said a Hausa girl was pregnant for him and the parents wanted her to terminate the pregnancy but she ran to the police station.

So the girl said Christian girls do get pregnant for Muslims so why can’t she? And she decided to keep the pregnancy.

They were having a festival in that area and the said chief priest was passing. They said some Hausa boys now pointed that ‘look at the man that brought disgrace (impregnating the Hausa girl) to us’ and one of them stabbed him to death,” the police source disclosed.

Asked if the chief priest had rejected the pregnancy, the Police said “he didn’t. They said their daughter shouldn’t have been pregnant for a non-Muslim”.

The spokesperson of the state police command, DSP Onome Onovwakpoyeya confirmed the killing of the chief priest by suspected ‘Hausa boys’.

“Yes, the chief priest was killed but not because he was a chief priest. The area is calm now” Onovwakpoyeya said