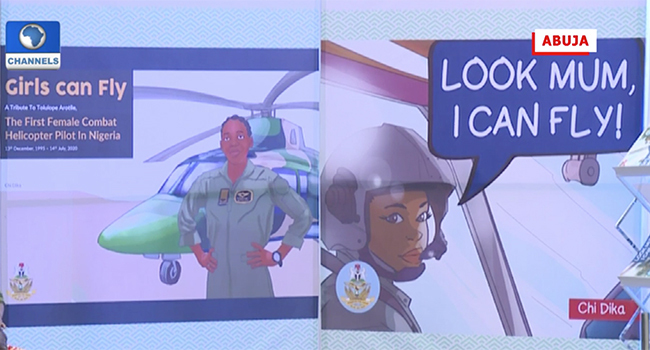 A comic book titled ‘Girls Can Fly’ has been launched in honour of late flying officer, Tolulope Arotile.

Arotile, Nigeria’s first-ever female combat helicopter pilot died in an accident on July 14, 2020, at the NAF base in Kaduna State at the age of 24.

The Heroes Comic Series was launched on Friday by the Chief of Air Staff (CAS) of the Nigerian Air Force (NAF), Air Marshal Sadique Abubakar at an event organised by the Ministry of Youths and Sports in partnership with ‘I Choose Life Foundation.’

The comic book is for children between ages three-13. It is written to serve as a source of encouragement to young Nigerians to make choices that will benefit them and their nation.

It is also aimed to be a source of inspiration to the girl-child.

Air Marshal Sadique Abubakar during the launch of the book described Arotile as a gallant officer whose heroic acts will never be forgotten.

The event, which is organised with the aim of celebrating the Spirit of Young Nigerians had in attendance the Minister of Youths and Sports, Sunday Dare; Minister of Women Affairs, Pauline Tallen, and the Minister of Information and Culture, Lai Mohammed.

The news of Arotile’s death in July 2020 shook the nation as many were saddened by the news of her death at a prime age.

The NAF later immortalised Arotile in September by naming a Pilot’s Crew Room after her.

CAS Abubakar during the launch of the renovated and remodelled Pilots’ Crew ‘Room’ at the 115 Special Operations Group (115 SOG) in Port Harcourt said immortalising the deceased was in fulfilment of the Force’s promise.