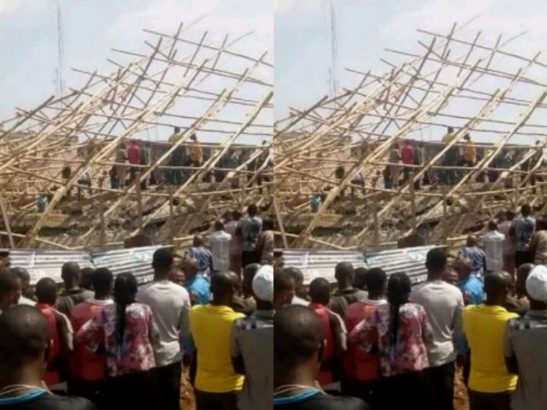 A four-storey building has collapsed at Ezenwa Street, Onitsha, Anambra state this afternoon Wednesday, May 22nd.

An eyewitnesses to the disaster revealed that the Four-storey building which was under construction, collapsed about 2pm with many of the artisans working in the construction site trapped inside the rubble.

The cause of the collapse might not be unconnected with the weak building materials used for the construction.

Seven persons have been rescued alive from the rubble while the remaining six, including the contractor, were still entrapped in the rubble.

Report say some of the men trapped in the collapsed building are still answering their phones as efforts are being made to rescue everyone alive.

According to reports, the building was marked for demolition, but the owner allegedly bribed officials and the demolition did not hold.