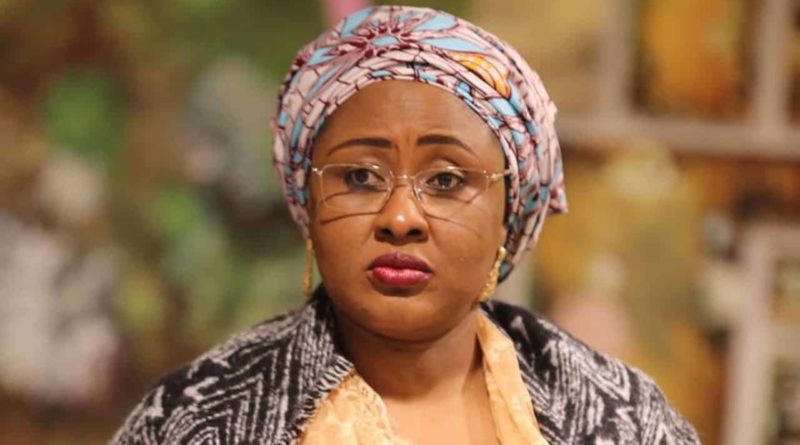 There are now different reports from sources in the Presidency claiming that the report that First Lady Aisha Buhari was almost involved in an air accident on Friday was filled with “half-truths or outright lies”.

The Nation reports that Presidency sources debunked the report as largely a fabrication of its author’s imagination.

The online media had been awash with the report of the alleged near air mishap involving a private jet, carrying the First Lady and one of her daughters, Hanan Buhari, and four other passengers.

The report, which claimed that the aircraft, supposedly owned by Borno-born billionaire, an in-law to the First Family, Alhaji Mohammed Indimi, was heading back to Nigeria from Dubai, also claimed that it lost control midair, almost one hour to landing time in Nigeria.

However, Presidency sources said on Saturday that the report was full of lies and unverified claims.

Although Spokesman to the First Lady, Aliyu Abdulahi, said he was still waiting for details of what happened from his principal, when contacted on Saturday, he however warned to treat social media reports with extreme caution, noting that most outlets do not respect ethics of journalism.

“I’m trying to confirm what happened so I can’t really… If you’ll give me time to confirm it’s okay, but if not, my advice is you have to take with a pinch or even a truckload of salt, most of the news coming from these online media. They are not hundred percent or even close to that, most of the time, from my own experience.

“Mostly they give about 10% information and then they go on to escalate and exaggerate their report to 100%. That’s not how journalism works”, he said.

Abdulahi, however, promised to reach back with credible information about what happened after he must have spoken with the First Lady.

However, another reliable Presidency source, who is quite close to the First Family, but who wished not to be named told The Nation that most of the claims of the popular version of the report online boldly dished out lies.

According to the source, besides the fact that the First Lady is back indeed, there was no other fact in the report that justified the truth.

“There’s no flight of Alhaji Indimi that has flown in the last two months, you won’t find it anywhere and that’s a fact, but these people claimed it was Indimi’s aircraft, they even quoted number. It is not true that the aircraft wanted to crash, this is another lie. Since they claimed it was carrying just six persons, how did they come about their story of crash threat? There were normal, air travel turbulences, which was normal. So the so-called ‘control loss for 10 minutes’ is also a fantasy.

“Another outright lie in their news is the claim that Hanan was aboard. This is not true, she did not travel to Dubai, how could she be returning from Dubai? I was with her on Monday. All these people are not journalists because they cannot be journalists and be attacking the image of the profession with lies the way all these so-called online media platforms are doing it”, the source said.