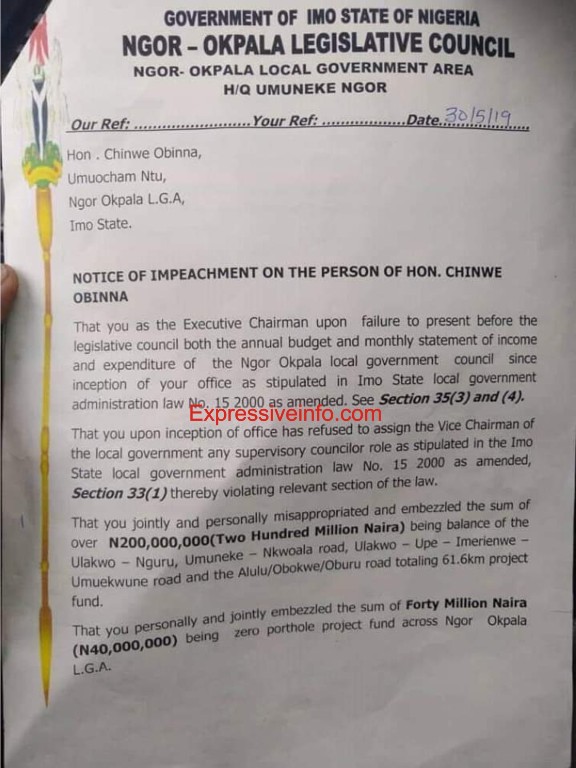 The leader of the Ngor Okpala LGA legislative council, Rt.Hon. Okereocha Collins and his fellow Councillors have served impeachment notice to the executive chairman of the local government area, Evang. Chinwe Obinna.

The leader of the council who described Chinwe Obinna as the most selfish local government chairman in Imo state and south eastern Nigeria, said that 94% of the legislators signed the impeachment notice against the chairman.

He also revealed, as also captured in the impeachment notice, that about N200,000,000 made for road construction was grossly embezzled by the chairman amongst other monies that runs into millions.

Reports confirmed from the council also revealed that a single executive council meeting has not been held in the Local government for over eight months now and yet the chairman embarked on execution of projects without due process.

The entire local government vehicles are also reportedly parked in the Chairman’s private residence for no just reason.

Mr. Obinna is said to be running the Ngor Okpala local government council in Imo state like a sole administrator who has no Deputy, Councillors and Supervisors as he never discussed any official matter with his executive cabinet before taking actions.

Report has it that Mr. Chinwe Obinna has since yesterday after receiving the impeachment notice, been going about begging his deputy; Hon. Magnus Nwachukwu, the leader of the council; Rt.Hon. Okereocha Collins and most Councillors for forgiveness.