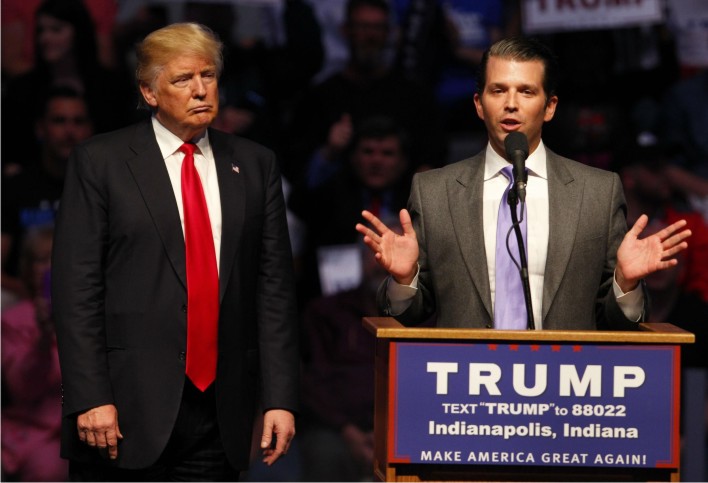 Donald Trump Jr has encouraged his father, President Donald Trump to ‘fight to the death’ over the presidential election and even ‘go to total war’.

The President’s eldest son made the comments on Thursday November 5, as he spoke at a news conference at the Georgia Republican Party Headquarters in Atlanta

‘I think the number one thing Donald Trump can do in this election is fight each and every one of these battles to the death so that we get full transparency in the process,’ Don Jr said.

‘And everyone on the Democrat side should welcome this unless they are actually cheating.’

‘We know that’s against the law, but you get in front of a Democrat judge in a Democrat city with Democrat control and it’s okay,’ he said.

‘I think the Democrats are used to this from a Republican party that hasn’t had a backbone – you’re not going to see that this time around,’ he added, prompting cheers from the crowd.

He also claimed it was a ‘statistical impossibility’ for his father not to receive a single vote in some counties where up to 123,000 ballots were all counted in Joe Biden’s favor.

‘Does anyone believe that this is possible?’ he asked, drawing a resounding ‘no’ from the crowd.

‘Because it’s not, it’s a statistical impossibility. It’s happened not just once, it’s happened over and over again.’

‘Americans need to know that this is not a banana republic and right now very few people have faith that’s not the case,’ he added.

Don Jr made similar comments in a tweet yesterday, in which he said his father should ‘go to total war’ and ‘expose all of the fraud that has been going on for far too long.’