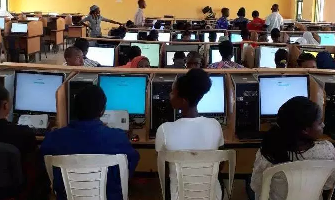 The Joint Admissions and Matriculation Board (JAMB) has debunked the trending news that results have been released for the just concluded Unified Tertiary Matriculation Exams.

The admissions body said it would reach out to candidates through their telephones as soon as all the results of the 2019 UTME were ratified.

The Head, Media and Information, JAMB, Mr. Fabian Benjamin, disclosed this in an interview with the News Agency of Nigeria (NAN)in Lagos.

Mr. Benjamin was of the opinion that candidates should not be carried away by what he described as rumours and misleading information in some sections of the media, especially social media.

Reports confirm that the 2019 UTME was conducted nationwide from Thursday, April 11 to Wednesday, April 18 and over 1.8 million candidates registered for the examination.

He said “Candidates should not bother themselves going to any cyber cafe to check any result. Our result check has been standardised. We will forward the results to the respective telephone numbers of those candidates who are deserving of it,”

He further added that “The board was intensifying efforts to ensure that results of deserving candidates were released by next week.”

Mr Benjamin also explained that it was not also true that the board was deducting some marks from candidates with proven cases of examination malpractice.

According to him, once the board establishes evidence of any form of examination malpractice, it will cancel outrightly, the result of such candidate rather than deduct marks.