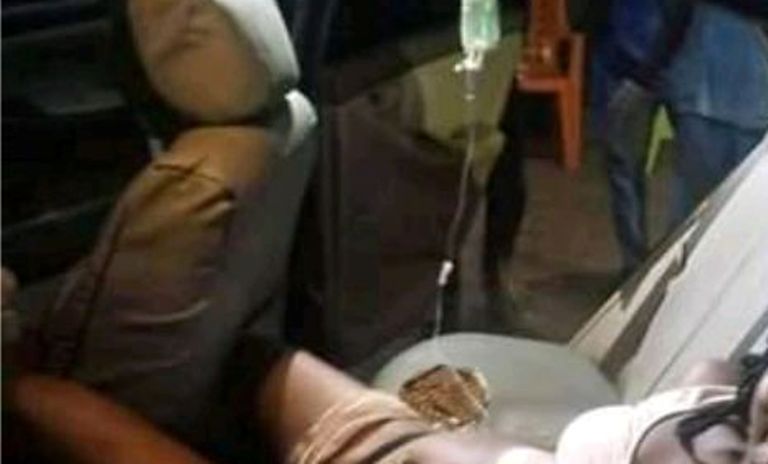 The daughter of a traditional ruler in Onicha Igboeze community in Onicha Local Government Area of Ebonyi state has died after being hit by a stray bullet.

The deceased said to be the daughter of HRH. Ezeogo Oshimiri Agw? Nwukpa, Oshimiri 1 of Onicha, died after the stray bullet allegedly fired by the Ebubeagu security operatives hit her at Onuafor Enuagu where she was selling fruits on Wednesday evening, September 8.

Details of the incident are still sketchy but former Ebonyi lawmaker, Hon. Linus Okorie, who shared a photo of the victim alleged that the shots were fired by Ebubeagu operatives who came to the area to arrest a coffin maker over undisclosed allegations.

“This young girl of about 25, a hardworking youth and daughter of HRH Oshimili Agwu Nwukpa, peacefully plying her legitimate trade of selling fruits at Onuafor Enuagu, Onicha Igboeze; was gruesomely gunned down by reckless “security operatives” this evening. She was hit by bullets from the guns of these goons while attending to her customers in her shop.

“While some say that the reckless shooters were POLICEMEN from Onicha Command Isu, other eyewitnesses insist that they were EBUBEAGU operatives that came in an UNMARKED WHITE HILUX from Isu to arrest a certain COFFIN MAKER for unclear allegations.

“Whichever group is responsible for this crime, it is one attack too many on the peaceful people of Onicha Igboeze; and the atrocity must be fully investigated and prosecuted.

“For too long and repeatedly now, the peace of Onicha Igboeze has been continuously disrupted by “state or quasi state” operators without justification. We have continually appealed and cautioned that Onicha Igboeze can be very volatile and that no one or authority should find pleasure in putting fire to the fuel of that undesirable volatility; but what do we get?

“In the heat of “Unknown Gun Men” era, an alleged Ebubeagu team shot their way into the same Afor Enuagu harassed villagers, destroyed properties and burnt down a widow’s home without justification.

“Also, a few Mondays ago, after a murderous attack at Anike Onicha by several gunmen that left about 8 people dead, several others injured, with many vehicles and motorcycles burnt; the same “Ebubeagu shooters” invaded the clan in a hail of bullets to execute a vexatious project of mass arrest of hapless villagers; who were still in deep shock of the day’s attack.

“We are peaceful, but not cowards. The people are long suffering, but not timid. They can be understanding, but not stupid. These unprovoked attacks must stop. No one should take the patience of the people of Onicha Igboeze for weakness or fear. We cannot be the shooting range of Ebubeagu or any trainee security force, or our people the dummies for live potshots.

“All those authorized to bear arms must be people appropriately trained and cleared to do so. The looming danger is that citizens could be pushed to resort to self help, if these unprovoked and unprofessional attacks are not stopped forthwith and the persons involved reined in.

“While calling on the good people of Onicha Igboeze to continue to remain calm and law-abiding, even in the face of this vexation act of murder, government and security agencies must act swiftly to arrest that team that invaded Onicha Igboeze today and snuffed life out of our daughter. They must be brought to justice.

“Meanwhile, both local and state government authorities must intervene with the bereaved family to provide succor and empathy at this point of their grief.

“Anything short is a call to anarchy.

“Rest In Peace dear daughter. You shall not die in vain”