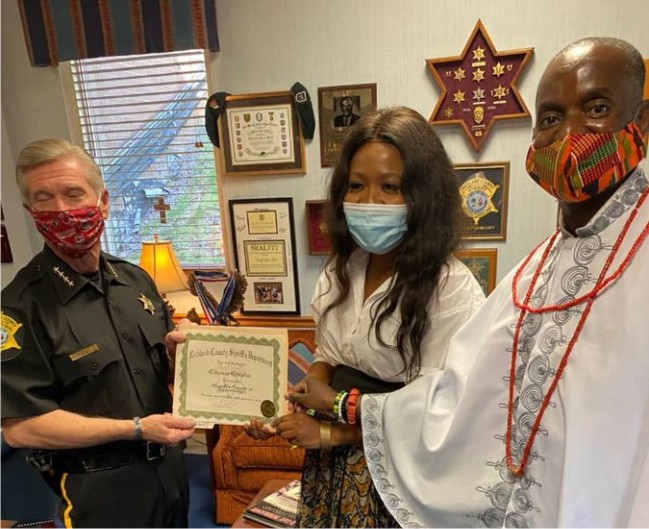 The Commission’s Head of Media, Abdur-Rahman Balogun, stated that it is a thing of joy that another Nigerian Diaspora has made Nigerians proud with her conduct.

It is gratifying to note that the uncommon act of honesty of Ms Chioma Odidika has earned her Integrity Award from the Sheriff of Richland County.

Dabiri-Erewa said “it is indeed a well deserved award and a great opportunity to celebrate you. This is another victory for Nigeria, as another proud Nigeria is portraying what Nigeria is about and that is honesty. Thanks for being a good ambassador of your country Nigeria, you have portrayed the image of Nigerians in the diaspora as unique, honest & trustworthy immigrants.

Chioma, who hails from Imo state, said she received an email from possible scammers. They called her and before she knew what was happening, they had sent a check of $4000 USD.

Odidika reported and surrendered the check. President Okei called both police leaders and made a strong representation and Ms Chioma was given an award of honesty by the Sheriff and offer of a job on 2nd September 2020.

This comes after that another Nigerian based in Qatar, Michael Jonathan Asemota in 2018 returned $441,127.99, about N150 million wrongfully posted into his account in Qatar.