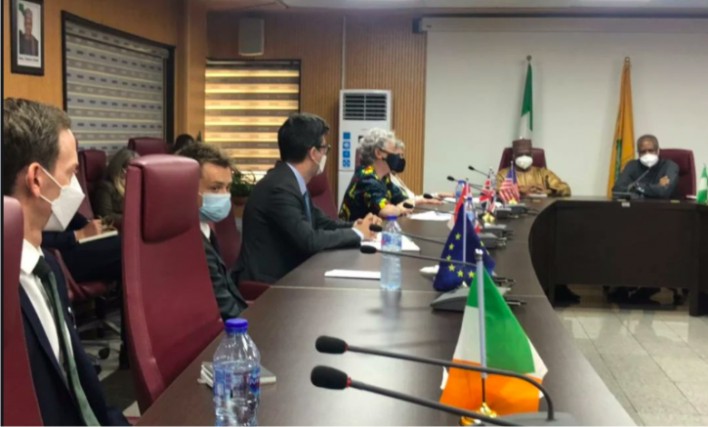 The Nigerian Government had a meeting with Envoys of the United Kingdom, United States, Ireland, Canada and the European union in Abuja on Monday to discuss the controversial suspension of Twitter’s operations in the country.

During the meeting, the Federal government represented by the Minister of Foreign Affairs, Geoffrey Onyeama gave conditions to lift its indefinite suspension of Twitter in Nigeria.

Onyeama said the micro-blogging site will be restored in Nigeria only if the platform can be used “responsibly”.

The US Ambassador to Nigeria, Mary Beth Leonard who led the team of Envoys to the meeting remained adamant on their earlier statement condemning of the action.

She said “I will say that first of all that we recognize that there are issues of responsible use of social media but we remain firm on our position that free access to the ability to express one’s self is actually very important perhaps on one part, but also at trouble times.”

She also advised the Nigeria government to identify those who commit crimes and use judicial processes to deal with offenders; adding “but to constrain, that is not the behaviour.”

The envoy also noted that they are glad to hear that Nigeria is interacting with twitter.

On the challenges confronting the country, she said, “I think we made that statement very clear that we are Nigeria’s strong partners. We recognise the daunting times in the area of security challenges that confronts Nigeria. Well they are daunting, they are not insurmountable and part of the way you surmount them is through partnership.”

Onyeama said although there is no definite timeline for when it will be restored, the micro-blogging site was suspended so as to stop it from being used as a platform for destabilisation and facilitation of criminality

“The condition would be responsible use of the social media and that really has to be it.

“We are not saying that Twitter is threatening the country or any such thing. Why we have taken this measure is to stop them to be used as platforms for destabilisation and facilitation of criminality or encouragement of criminalities” he said

At the meeting held in Abuja were the envoys of the US, UK, Canada and the European Union, all of whom had condemned the “indefinite” suspension of Twitter in Nigeria.

Onyeama told newsmen after the meeting that the meeting was called for because the Federal government takes the comments of the envoys “very seriously”, hence the decision to discuss the matter with them in the “usual friendly way.” The Minister added that the Buhari administration has to keep an eye on its “main objective and legacy” which, according to him, is the security of lives and property.

“We want to use social media for good. Differences of opinion is not a problem; everybody will not think alike.