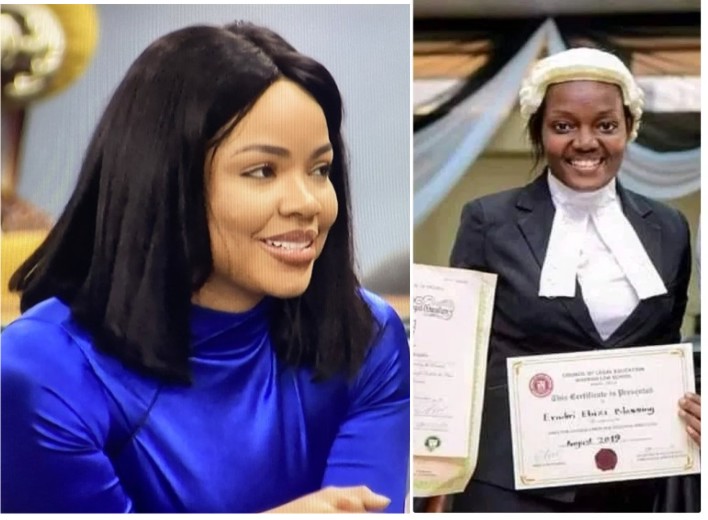 The Governor replaced Nengi’s name with Ebizi Blessing Eradiri who is now the Face of Bayelsa Girl Child.

Miss Eradiri is the first female First Class graduate from the Faculty of Law at the Niger Delta University (NDU), a feat she repeated at the Nigerian Law School.

However, no reason was given by the governor for the new change but it may not be unconnected to the criticism drawn by the appointment of Nengi.

Many Nigerians had called for the Eradiri, a Bayelsa-born First Class Law Graduate, who has not only made Bayelsans proud but also the entire Izon nation on her excellent performance at the Niger Delta University and the Nigerian Law School, Lagos Campus.

Some also argued that Eradiri has distinguished herself and should be the ‘Role Model’ to Bayelsa Youths.

However, Governor Giri took the bold step and announced Ebizi Blessing Eradiri as the New Face of Bayelsa on Monday, January 11, 2021.

While receiving her and her father, Boloupaye Eradiri, at the Government House, Yenagoa, Diri also gave her automatic employment to lecture at the NDU’s Faculty of Law.

The governor assured her of the state government’s support in advancing her educational career in any university of her choice anywhere in the world.

Diri, who announced Eradiri as the New Face of the Bayelsa Girl Child, said the gesture was aimed at making her a role model for young girls in the state and the entire Ijaw nation to emulate.

He equally dismissed speculations, particularly in the social media, about his government’s choice of honouring Miss Nengi Hampson of the last edition of Big Brother Naija, while refusing to recognise Eradiri, as false.

Diri, who expressed concern about the politicisation of issues in the state, however, assured that his administration’s investments in the education sector would remain a top priority.

Describing Eradiri as a brilliant and rising star, the governor congratulated her on making history in bagging first-class honours not only at the NDU but also at the Nigerian Law School.

He also sought the Federal Government assistance towards the young lawyer’s development beyond what the state government was offering to enable her to add value not only to her state but the entire country.

Speaking, the Ibenanaowei of Ekpetiama Clan, King Bubaraye Dakolo, said they were proud of the breakthroughs of their daughter from primary to the tertiary level and that she deserved to be encouraged.

King Dakolo, who described Eradiri as exceptionally good, said she had won over 50 laurels from her primary to tertiary education level.

Responding, Miss Eradiri expressed gratitude to Governor Diri for the honour and attributed her success to God and her exposure to good educational infrastructure.

They observed a minute’s silence in honour of the late Mrs. Eradiri.

Eradiri currently serves as an Associate at Templars, a top tier law firm in Lagos. And for clinching the new role, the Governor awarded Eradiri an automatic Scholarship up to PhD and automatic employment as a lecturer in Faculty of Law, Niger Delta University.

Some of Miss Ebizi Blessing Eradiri awards include: