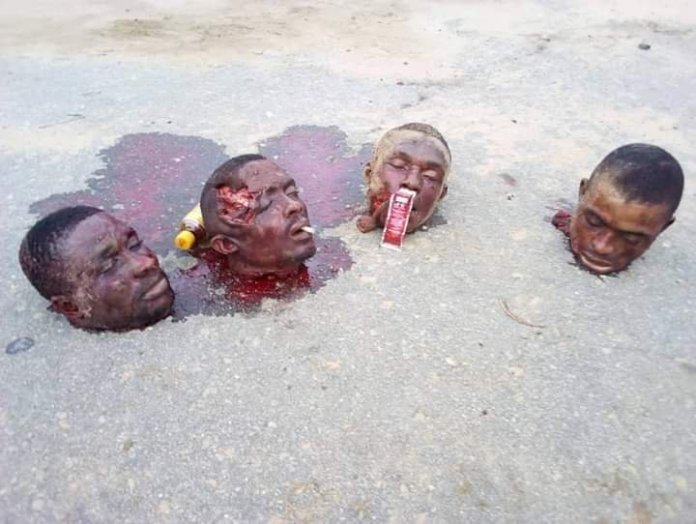 Information gathered so far reveal that four persons were beheaded in Rumuji community by the suspected cultists.

From the graphic photo one can see a sachet of an alcoholic drink, a bottle of a beverage drink and a half-smoked cigarette left in the mouth of one of the heads.

The fifth victim, who was identified as Chioma Okogbule, was reportedly killed inside his bedroom in Mgbuitawo community.

A community source (name withheld), who confirmed the killings in Rumuji community, said they woke up early hours of yesterday, to discover four decapitated heads after the sporadic shooting that lasted for hours before the daybreak.

Further information gathered from a community source who did not want to be mentioned said that there was a disagreement between Iceland cult group and De bam cult group over who would collect certain levies.

He added that attempts to settle the dispute by youths in the community did not make much success leading to the renewed cult battle in the area.

However, a senior police officer attached to Rumuji Division has disclosed that security operatives have moved into the community. Rivers State Police Command is yet to issue an official statement on the killings as at the time of filing the report.