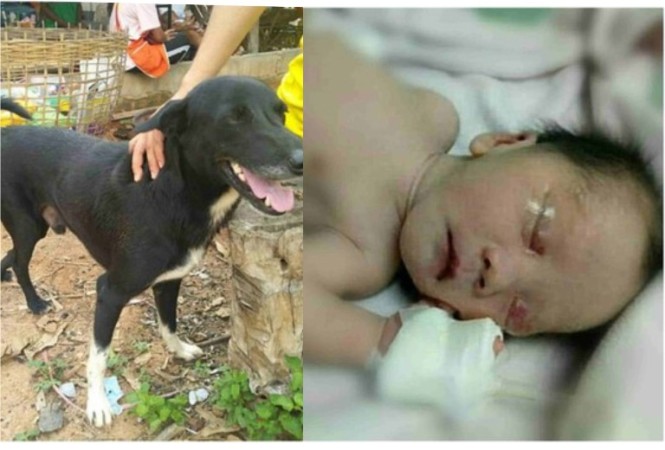 A Hero dog in Thailand named Ping Pong is being hailed in the Asian country for helping save the life of a newborn baby after the infant’s 15-year-old mother tried to hide the birth by burying the boy alive.

The dog who has only three working legs, was seen scratching at some dirt alongside a farmer’s field in Korat, located in the northeastern part of the Asian country on Wednesday.
Ping Pong’s owner Usa Nisaika went to check the commotion and found an infant’s leg poking up from where the dog was scratching.

The infant has been deemed healthy and police have arrested his 15-year-old mother on suspicion of attempted murder.

Usa said his dog – which only has three working legs having been hit by a car when he was younger – was a ‘hero’.

I have had Ping Pong since he was born and he has always been very loyal and obedient. When he was younger a car hit him and his back leg was injured. He cannot use it but he still helps me when I’m herding cows.

Everybody in the village is amazed by what he has done now. He is a hero because he saved the life of the baby.

The teenage mother was arrested a day after the attempted murder.