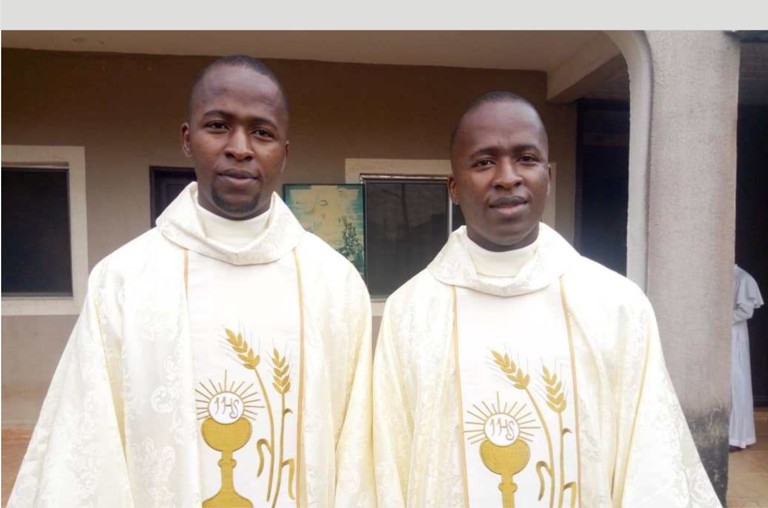 It was gathered that Rev. Fr. Paul Mary Onele and Rev. Fr. Peter Mary Onele, were the first twins to be ordained priests since St. Anthony Mary Claret founded the Claretian Missionaries in 1849.

Bishop Gyamfi, who presided over the ordination mass charged the newly ordained to be shining examples to the world.

Gyamfi told them to emulate Jesus Christ, and reach out to people both in towns and villages in the course of their missionary work.

He said that the key duty of a priest was to interface between God and man, adding that any priest who is not prayerful was not worth his calling.

“Teach what you believe and practise what you preach. You must endeavour to pray three times; in the morning, afternoon and evening.

“Make sure you pray, as prayer nourishes the soul, just as food does to the body,” he said.

Gyamfi who described the event as ‘significant’, said the ordination of Paul Mary and Peter Mary Onele was the first for him to witness priestly ordination of twins.

He called on the congregation to equally pray and support the clergy materially, noting that the work of a priest is not an easy one.

He also thanked other parents who donated their wards to the service of God.

NAN reports that Paul Mary Onele who hails from Nkaliki in Abakaliki Local Government Area of Ebonyi worked with NAN, Abakaliki office before he joined the seminary school in 2008.

Mr Sunday Onele and Mrs Chinwe Onele, uncle and mother of the twin priests respectively, said the path of training two young men as Catholic clergymen  was not easy.

”We are grateful to God that the two young men have today made it to the end of their priestly journey, and we pray God to continue to guide them,” Sunday said.

Rev. Fr. Paul Mary said he was thankful to God for seeing him and his twin brother Peter Mary through the rough path to priesthood.