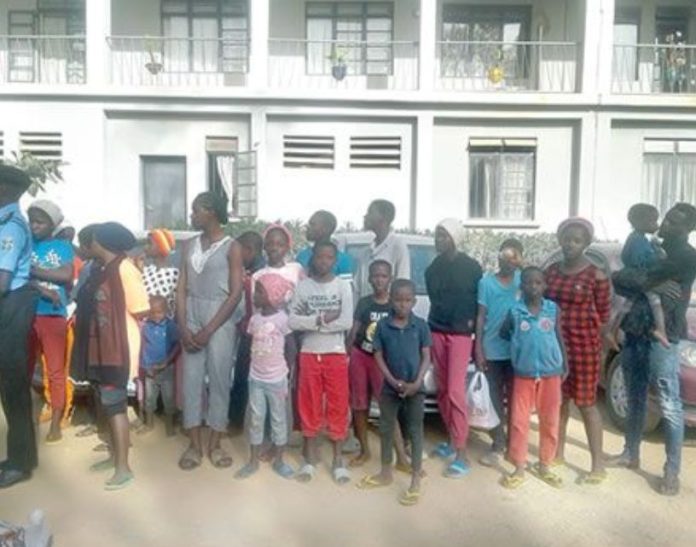 The Nigeria Christian Graduate Fellowship, on Sunday, raised an alarm that a Kano-based Orphanage Home, Nasarawa Children’s Home was maltreating and converting orphans from Du Merci Orphanage, to Islam.

The orphans were said to have been forcefully transferred from Du Merci Children Development Ministry to Nasarawa Children’s home after the arrest of its proprietor, Prof Solomon Tarfa in December 2019 by the Kano State Police Command.

The NCGF raised the alarm in a statement by its National President, Prof. Charles Adeyinka Adisa and Attorney/member, Board of Trustees of Du Merci Orphanage, Offiong Offiong.

“We are calling on well-meaning Nigerians and Government to put an end to the abuse of these children by the Kano State Police Command and the Government of Kano State. This is contrary to our constitution which enshrined Freedom of association and freedom of choice of faith”, the organisation said.

The statement entitled: “Inmates of Merci Orphanage in Kano are being forcefully converted”, also alleged that not only were the children denied access to continue their education, their health, but physical state and psyche were also deteriorating both spiritually and psychologically due to the level of maltreatment being given to them.

“Prof Solomon Tarfa has spent two months now in police detention since December last year including the Christmas season, for being a good Samaritan. He is yet to be released in spite of the injustices and lies of the Kano State Police Command.

“In addition, the children of the Orphanage forcefully removed from the orphanage and transferred to a government orphanage called Nasarawa Children’s home in Kano are being maltreated, maligned and coerced to convert to Islam.

“Reports got to us that most of the children are being put under pressure to convert to Islam with enticing and inviting offers. There are voice recordings to prove this fact.

“These continued till yesterday (Saturday) evening at about 4pm when their mother got a call that there was a fist fight between some of the children and theirs. What happened: one of the girls that has been abusing and threatening Du Merci kids fell into a well and one of the boys laughed. The girl picked offense and struck him on his head with a mop stick. Paul, the boy she hit started crying and Blessing one of the older girls from Du Merci Orphanage came to his rescue challenging the right she has to touch her younger brother.

“The other girl got angry raining insults on Blessing, that the Du Merci children’s prayers are affecting them and accused them of witchcraft. The staff at Nassarawa home separated them, informed the Director and Commissioner of Women Affairs. She, “the commissioner” said she’ll be with them in the morning.

“At about 12:30pm on Saturday 22nd February 2020, it was reported that the commissioner was around and wanted to see the older ones among the Du Merci children. She invited them for a talk.

“At about 2:13pm one of the children who is 16 years old called to report that Micheal, one of the Du Merci Orphanage children forcefully taken to the government-owned orphanage was being beaten by the officers and the Commissioner was physically present when this physical abuse was taking place.

“At about 3.15 pm another caller reported that the children have been taken back to Nasarawa home and their phones were confiscated. We asked for a break down of what happened and Micheal gave his testimony of all that transpired. He said the Commissioner asked him if he was to be set free where would he go? He replied home. She asked where is his home and he said Du Merci.

“She asked which of the Du Merci homes? Kaduna or Kano? He said Kano.

She told him Du Merci is illegal. Michael replied her and said No, the case is in court so Du Merci is not Illegal.

“One of the officers challenged his answer, asking if he means the commissioner is lying he said probably. As they all do not like this place where they are being kept “ we want to go back home. How can you claim to rescue us yet we do not have our freedom. Not one of the children have been to school. The place is unhygienic. So we hate this place and I know my right.

“That statement got her angry, he said she almost wanted to inflict more damage on him then the officers held him and started slapping and hitting him. His phone was collected and all audio records he made was deleted and wiped out.

“He was forced to unlock his phone which he did. Shortly after, the phone locked and they asked him to unlock again he insisted no he wouldn’t. The officer threatened to format/ flash the phone. Michael replied the phone is his personal property the officer has no right to tamper with anything on it. This happened on February 22, 2020; evidently, it is clear that their agenda is to forcefully convert the Children to Islam.”