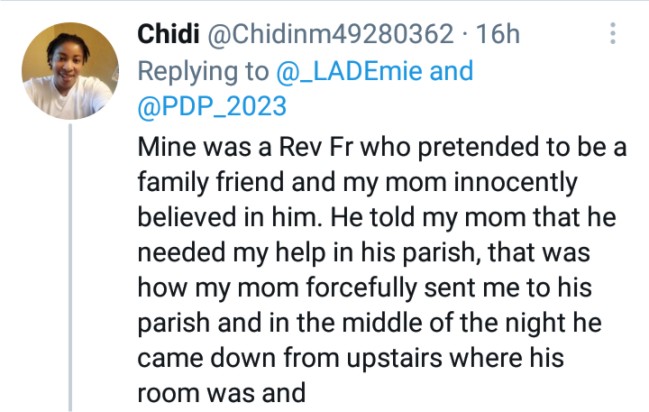 A Nigerian lady known on Twitter as @Chidinm49280362 has recounted how she saved herself after a Catholic priest almost raped her when she was much younger.

She was reacting to a tweet by @LADEmie who shared the sad story of how she was defiled by her father’s military superior in the barracks when she was celebrating her 11th birthday. Read more of that Here.

Recounting her own experience, Chidinma wrote:

“Mine was a Rev Fr who pretended to be a family friend and my mom innocently believed in him. He told my mom that he needed my help in his parish, that was how my mom forcefully sent me to his parish and in the middle of the night he came down from upstairs where his room was and took me to his room lock the door and hid the key.

“He brought out his huge penis and that was my first time of seeing what adult penis looks like, I was shocked and so afraid that I summoned courage and shouted , I told him if he doesn’t release me and open the door for me that

“I will shout , and I Know that I was not the only person in that building, he tried to force himself on me , immediatly I raised my voice , he ran and brought out the key and opened the door for me and I ran out. That was how God saved me.”