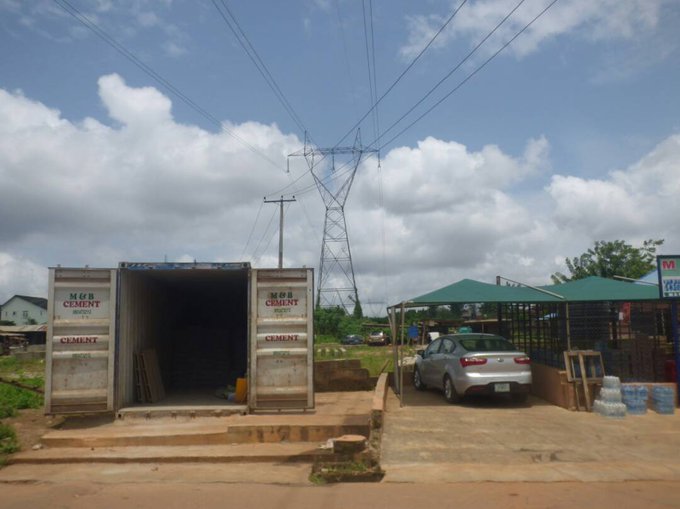 Double tragedy struck residents of Oke Aigo street in Ile-Oluji/Okeigbo council area of Ondo state after the last Easter festivity turned into mourning while a birthday celebration by some children in the neighborhood turned tragic.

The incident happened on April 21 when two siblings and two other children were electrocuted in a steel container shop when a newly installed 11kv Powerline snapped and fell on it.

Those electrocuted were the siblings; Akinyemiju Motunrayo and Akinyemiju Jesutofunmi as well as  Adebiyi Adebowale and Akinfisoye Samuel while the only survivor, Adebiyi precious, is still in critical condition at the Obafemi Awolowo University Teaching Hospitals Complex (OAUTHC), Ile Ife, Osun state.

One of the victims, Samuel Akinfisoye is the son of the community head (Baale) of Adegbaso village, in ile-Oluji, Rope Akinfisoye.

Five children reportedly gathered to rejoice and celebrate the birthday of one of them inside the container shop belonging to one of their parents when the unexpected occurred after electricity was restored in the area.

While four of the children said to be leaning on the steel container were instantly electrocuted, the only survivor, Adebiyi precious, who sat on a plank inside the container escaped death by whiskers but was badly injured. The two siblings who died, it was gathered came with their parents to celebrate the Easter festivity with their aunt, who owns the shop.

Father of one of the victims, Adebiyi Olumide confirmed that the children were actually playing and celebrating the birthday of one of them when they met their untimely death.

According to him, immediately electricity was restored at about 4pm, the cable snapped and fell on the container where the children were celebrating. It’s a sad occurrence, a birthday party which suddenly claimed the lives of four children at once.

Speaking with Vanguard, an older lady identified as Blessing who survived and rescued Precious Adebiyi said “We were playing and suddenly, power was restored. So, we shouted ‘up NEPA and that was all. Immediately, we heard the sound of electrical sparks, we ran out of the shop, not knowing that the new cable wire had snapped and fell on my mummy’s container shop.

“As we ran out of the container, the snapped cable trapped our legs and we could not walk again. So, I sat on the plank that was close to me, but the remaining children started shaking and vomiting blood. I shouted for help and people came to rescue us and we were rushed to the General hospital, Ile-Oluji. I’m still in shock but have taken solace in God.”

Father of the two siblings

In an interview with Saturday Vanguard, Mr Akinyemiju Akinlayo, the father of the two siblings electrocuted, Motunrayo and Jesutofunmi, said two of his three children died in the incident.

According to him “I had three children, two died suddenly in one single day. I have been in shock since April 21 when l lost my two daughters. They were not sick, they went for the Easter festivity only for a relation to call me on phone that something has happened to my children. I took a bike and rushed to Ile Oluji only to behold the corpses of my two children. I am sad, but what can I do. When the management staff of BEDC visited I told them that fighting them will not bring my two children back to life. We’ve taken solace in God who knows best.”

I lost one, the other in critical condition in OAUTHC—Father

Another father of the victims, Chief Olumide Adebiyi who lost one of his children, Adebowale while the other child, Precious is still on admission at the Obafemi Awolowo University Teaching Hospitals Complex (OAUTHC) in Ile-Ife told Vanguard that the daughter was rushed to the Trauma Centre in Ondo but was later referred to OAUTHC in Ile Ife.

According to him, “immediately the incident happened, we rushed to the scene and it was discovered that there was nothing anybody could do because the four children including my son had died. It was a lady called Blessing that God used to save my other daughter, Precious. We quickly rushed her to the Trauma Centre in Ondo but they referred us to OAUTHC in Ile lfe. She is presently there and she’s responding to treatment.

“It’s a sad incident but we cannot blame God, we’ve taken solace in God who knows the end from the beginning and who said in all things we should give thanks. May His name be praised forever. What has been written cannot be changed.”

He then solicited for assistance from well meaning Nigerians to offset the medical bill of his daughter, Precious still on admission in OAUTHC in Ile Ife.

Chief Adebiyi confirmed that the management of BEDC had visited to sympathise with the families of the Victims.