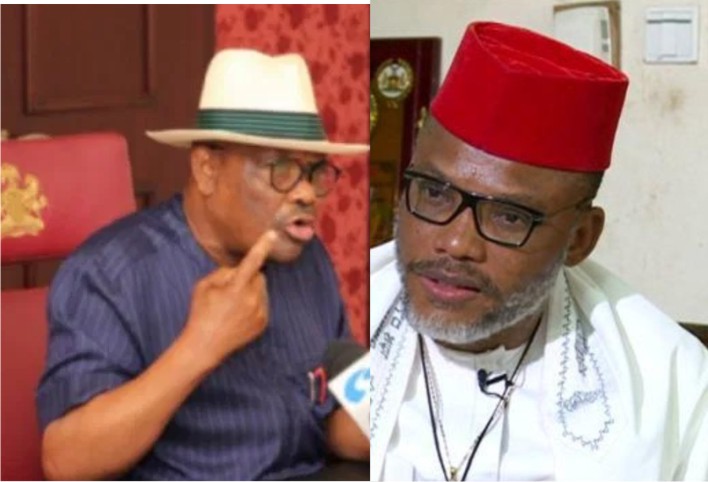 He said he is not Senator Ike Ekweremadu who was harassed by IPOB members when he traveled out of the country.

Wike was reacting to alleged threat that he will be dealt with whenever he travelled out of the country.

Wike said; “I will walk around Europe or anywhere without looking back, I’m not Ekweremadu, no one can intimidate me.”

The governor also justified the presence of military operation in Oyigbo area of the State. The military has been in Oyigbo for the past 10 days.

He said that although he did personally invited them to go to Oyigbo, as he has not been a good friend of the military, the killing of six soldiers, policemen and burning of police stations were enough invitation for the military.

“I have never been a friend to the Nigerian Army. I did not send the military to Oyigbo. I am not loved by them.
They are sponsoring a propaganda against me by saying I invited the army to kill Igbo people.”

He stated that when “you kill soldiers and policemen and burn down stations, do you expect them, especially the army to go away?”

On the issue of the curfew in Oyigbo, Wike said it was for the interest of the residents there, insisting that whatever it takes for members of IPOB not Igbos to leave Oyigbo, they should do so.

He, however, promised that the State Security Council would be meeting on Tuesday, to review the security situation in the state, particularly in Oyigbo LGA.

Wike revealed that members of IPOB erected a shrine in Oyigbo, had the effrontery to erect IPOB’s flag there with the photos of Nnamdi Kanu symbolising that Oyigbo is a conquered territory and governed by Kanu.

“There are shrines in Oyigbo owned by IPOB members, when you go there you see IPOB flag and Kanu’s picture in the shrine. I can’t fold my arms and watch people destroy my state, not just destroying, but also annexing my state into what they are doing,” he said.

Wike, who disclosed this on a live Television Programme in Port Harcourt said he knew who is sending the IPOB members to the State because they were interested in running for the Presidency.

“I have relationship with the Igbo, if they want to run for president, I can support them, it doesn’t mean I’m Igbo, I can’t change my identity,” he said.

On the allegations that he is killing the Igbo, Wike explained that he has a long standing relationship with the Igbo, but queried why he should kill Igbo in Oyigbo and not kill the ones in Port Harcourt? He said the propaganda did make sense.