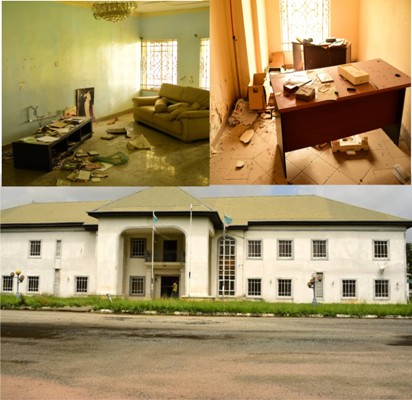 The Deputy Governor of Imo State, Gerald Irona led a team of government officials on Friday, 7th of June to inspect the ‘Deputy Governor’s Lodge’ at Commissioners Quarters, Owerri.

Expressiveinfo has gathered the distasteful photos of the interior and exterior sections of the lodge released by the government media team after the facility tour.

Recall that we shared the embarrassing photos that were released after Governor Ihedioha inspected the Imo Government House his predecessor, Rochas Okorocha left behind (Read that here). Rumours have been going round since then that those photos were released because of a supposed plan by the governor to set aside 5 billion Naira to renovate the governor’s lodge.

Regarding the ‘Deputy Governor’s Lodge’, you have to recall that the former deputy governor, Eze Madumere has been at a loggerhead with former governor Rochas Okorocha shortly before the APC primary elections which held in October, 2018 due to Okorocha’s preferred choice of a successor.

Worthy of note is that former deputy governor Madumere stopped living at the official lodge since the conflict with his former boss started last year and the lodge had been unoccupied ever since.

Find below more photos that emerged following the inspection on Friday by Deputy Governor Irona and his team.