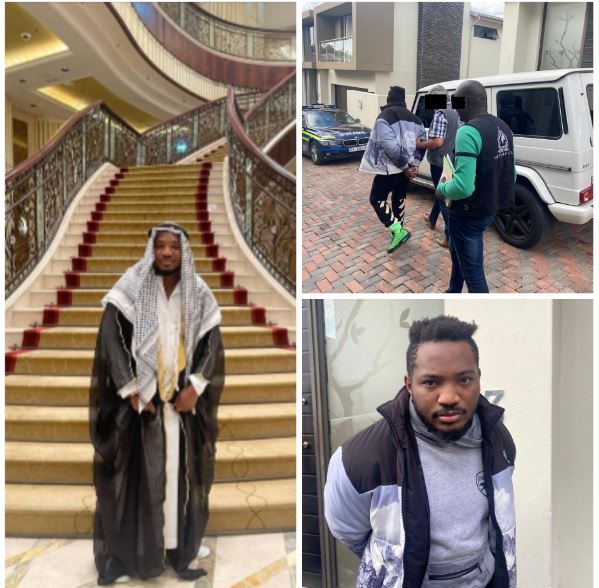 INTERPOL, in collaboration with the US Secret Service, South African Police and other agencies, has arrested an alleged Nigerian cybercrime kingpin, James Aliyu, in connection with $12m romance scam and business email compromise fraud.

Aliyu was arrested in a luxury Sandton estate in South Africa on Wednesday, June 29 and arraigned in the Randburg magistrate’s court.

According TimesLive, the Nigerian national is well known in SA social circles and on Instagram thanks to his lavish holidays and excessive spending on luxury items for him and his girlfriend.

His social media posts where he flaunts his wealth have gained him 17,000 followers on his Instagram account Oldsoldier.

His spending came to an end when Interpol agents arrested him at his house situated in a luxury Sandton estate, bringing to an end five years of alleged scamming activity.

According to law enforcement sources, after an almost six-year-long investigation into the alleged scammer’s activities, he was arrested thanks to a multi-agency investigation that included Interpol, the US department of homeland security investigations and the US Secret Service.

Sources claimed Aliyu has allegedly been in contact with several major convicted and suspected fraudsters from around the world and that he is considered a major player.

Among the fleet of luxury vehicles he allegedly bought with the proceeds of alleged fraud were a Porche Cayenne, a Mercedes C220d and a Mercedes-Benz G Class luxury SUV. His social media profiles also depict him on luxury island resorts and luxury holidays in Dubai and the US.

Aliyu is alleged to be part of an international syndicate, some of whose members have already been convicted in the US.

Aliyu came into the spotlight in August last year when Sunday World reported that he accused SA actress Khanyi Mbau’s boyfriend, Terrence Kudzai Mushonga of defrauding him in an elaborate luxury R1.2m-vehicle scam.

According to the article, Aliyu believed a R720,000 Mercedes and a R500,000 Jaguar which he bought from Mushonga were stolen and hijacked by criminals he claimed had worked for Mushonga.

He claimed that Mushonga, a Zimbabwean national, approached him and introduced himself as Dick Lefa Nzula from SA.

Aliyu said Mushonga gave him copies of his SA driver’s licence, smart card ID and vehicle papers, for the change of ownership and registration of the cars to his name.

Aliyu also told Sunday World the documents he was given for the vehicles were fake. But Mushonga claimed he would not repay Aliyu because the money he received from Aliyu were the “proceeds of crime”.

The Sunday World quoted him as saying that he was “wanted by the FBI for scamming Americans millions of rand”.

Aliyu is expected to appear in the Randburg magistrate’s court next Tuesday July 5, where proceedings for his extradition for trial in the US are expected to start.