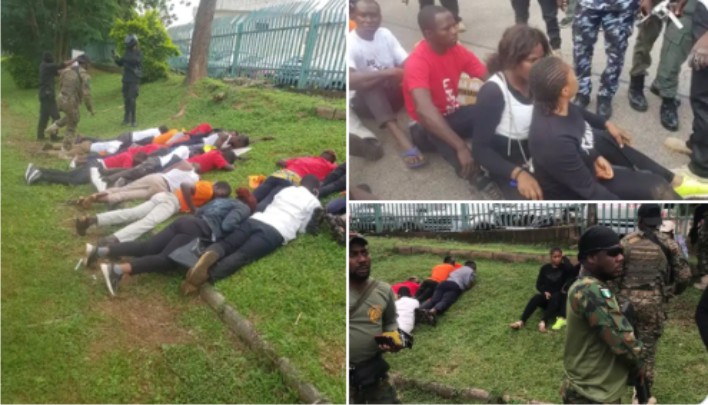 Operatives of the Nigeria Police Force, Army and Department of State Services (DSS), on Wednesday arrested several #RevolutionNow protesters in the Abuja metropolis and other areas.

The protesters carrying placards and banners had set out as early as 8 am to demand good governance.

Some of the banners read, ‘Nigerians are sick and tired of poverty, corruption, injustice and untimely death’; ‘Say no to injustice’, ‘Yes to living wage for unemployed youths’.

The protesters, many of whom wore orange berets, converged on the Unity Fountain, Shehu Shagari Way, Maitama, and were about to begin their procession when policemen stormed the venue and dispersed them.

Soldiers and other security operatives also cordoned off adjoining streets including Aguiyi Ironsi Street to prevent the protesters from marching.

Akinyode said, “They arrested about 29 of our people. Security officials made them to lie down and beat them. Even as a lawyer I was harassed. They pushed me around. This is very undemocratic.”

Department of State Services, DSS in Osogbo also rearrested Olawale Bakare who had been arraigned alongside Omoyele Sowore after their arrest on August 4th, 2019.

The video below shows a moment a man was arrested while he was speaking.

It was learnt that the protests are ongoing in other states, including Lagos. See more videos from the protest below.