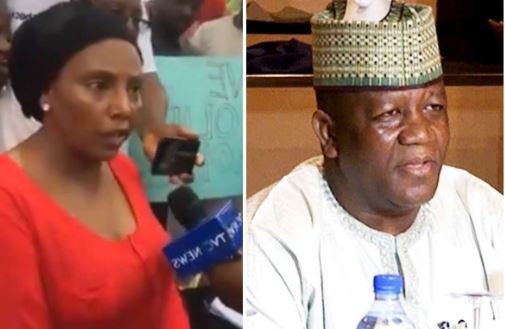 Kadaria Ahmed, a veteran broadcast journalist and writer was among the protesters that marched to the presidential villa in Abuja on Saturday due to the killings in Zamfara State.

Despite the president ordering the deployment of a thousand security personnel back in 2018, to the state, the security situation is yet to improve.

The governor of the state Abdulaziz Yari, has come under massive heat for not doing enough to stop the incessant killings in the occasion.

When journalists sought Kadaria Ahmed’s opinion on the governor’s effort, she released the thunder that Governor Abdulaziz Yari of Zamfara State is the most useless Governor in the country’s history.

In her own words,

“As far as I am concerned, that governor is the most useless governor in the history of Nigeria.”

“He only cares about the people of Zamfara when it comes to politics. The fact that they are getting killed does not concern him. He lives most of his time here in Abuja. How can you govern a state for eight years from Abuja? What sort of leadership is that? We are so happy he is on his way out.” “He is hopeless as a leader. He has not done well for our people. Under him, Zamfara has deteriorated.”

For those of you who do not know Kadaria Ahmed, this brave woman is a renown journalist, a scintillating TV host and the media entrepreneur who anchored the TV show, The Candidates during the electioneering period.

See some of her photos below: