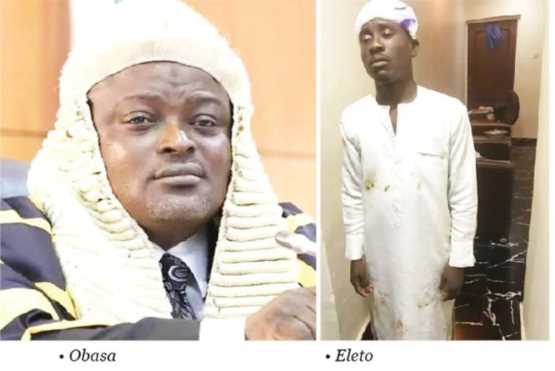 A  lawyer, Yakubu Eleto, has accused some workers at the Lagos State House of Assembly, led by the Chief Security Officer, of brutalising him when he attempted to serve the Speaker, Mudashiru Obasa, with a suit.

According to the Punch, Eleto, alleged on Saturday that he was beaten to a pulp and taken to the Alausa Police Station, where he collapsed. He claimed that the police later put him in a vehicle, where he was kept for several hours before he was released.

It was gathered that Eleto and some lawyers dragged the state House of Assembly and the Lagos State Independent Electoral Commission before the Federal High Court, Ikoyi, over the state council poll slated for Saturday, July 24.

The lawyers want the court to compel the state government to conduct the election in the 20 Local Government Areas of the state, and not the 57 LGAs and LCDAs.

The court was said to have slated hearing for October, as the 39-year-old lawyer drew the court’s attention to the election date. The court then moved hearing till Monday, July 19.

Eleto said around 11am on Friday, he got to the Assembly to deliver a letter informing the lawmakers of the development. He noted that a paramilitary officer at the gate promised to contact an official who would receive the letter.

The activist said after waiting for about two hours, he became anxious and complained.

“Suddenly, I saw a tall dark young man approaching the gate from the Assembly complex. I noticed the police officers on duty adjusted themselves and they became jittery of him.

“The said young man approached me and said, ‘They said you have been disturbing the security for the past two hours, what is your problem?’

“I replied that ‘I have a letter to submit concerning a court case that would come up on Monday, July 19, at the Federal High Court, Lagos State, and the House of Assembly is a party and its important for me to put them on notice.’

“He replied further saying, ‘Mr Man, we are not taking this letter; we have the discretion to determine what or which letter to take.’ I told him could such discretion work when it comes to a public office.

“He replied that I was rude to him and ordered the police officers on duty to throw me out of the complex.  The officers asked me to leave under the young man’s directive.

“Suddenly, I noticed the CSO returned with eight mobile policemen. The CSO said it point-blank that I came to the Assembly with a destructive mission and that he had instruction to deal with me.

“He, therefore, asked them to seize my phones, forcefully collected my pens, dragged my shirt, pulled me in the company of the mobile policemen and carried me like a five-year-old boy to the Assembly gate into a waiting police van, with plate no RRS 387 LA.

“They eventually dragged me on the floor, tear-gassed me, poured pepper spray on my face, brutalised me, dehumanised me and forcefully made me enter the car and whisked me in a commando manner to the Alausa Police Station, where I was kept behind the counter till I became unconscious,” he added.

Eleto said after he came round, he requested to call his colleagues,  adding that a policewoman returned his phone.

The victim said he contacted four lawyers and urged that the incident be escalated to two other senior lawyers.

“Immediately they heard the names I called, they asked me to stand up. I didn’t respond, as I had no strength left. They ransacked me once again, gave me dirty slaps, used metals on my joints and used their guns to hit me on my thighs, while saying that I was proving stubborn.

“I became seriously weak and they carried me once again into their van and took me to an unknown destination. They later drove me around Ikeja and back to the House of Assembly, where I was locked in the car for several hours.

“The policemen came back later in the night, returned all my belongings, and said ‘Oga has asked you to go.’  I left the Assembly and went home with stains and pains all over my body,” he added.

A colleague of the victim, Saheed Sani, while calling for justice, said the Alausa Police Station confirmed that Eleto was brought to the station.

The Chairman, House Committee on Information and Strategy, Setonji David, promised to investigate the incident.

He insisted that there was no basis for the lawyer to be beaten, adding that different groups usually visited the Assembly for protests without any incident.

He said, “The Lagos Assembly is the people’s parliament. When you bring any correspondence to the House, if it is for the clerk, you drop it in the clerk’s office and it will be acknowledged.

“I think in this instance, the man insisted on seeing the clerk. Must he see the clerk? Must he see the speaker? They are all busy people. They have offices and you can always go there to drop your correspondence. I have not heard of anyone dropping a letter and being molested. It is not possible because the workers are under instruction.”

The state Police Public Relations Officer, Muyiwa Adejobi, said he was not aware of the incident.