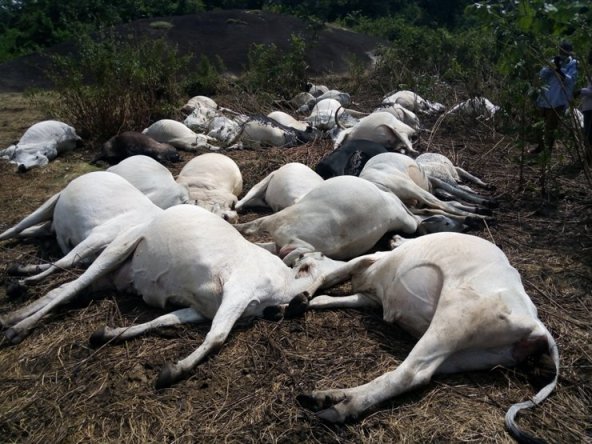 High Chief Wemimo Olaniran, the Sapetu of Ijare Kingdom, has disclosed that about 50 cows were struck dead by thunder because Fulani Herdsmen ignored their warnings against taking their cows to the sacred mountain of the town for grazing.

The cows belonging to Fulani herdsmen were struck to death by thunder and lightning in Ijare community in the Ifedore local government area of Ondo state.

It was gathered that the cows were recently moved by herdsmen into the community’s sacred groove located on the town’s mountain top when the disaster occurred.

The cows were seen littered on the ground, lying lifelessly under the sacred mountain where the incident occurred.

Speaking after the incident, Chief Olaniran said that ‘Oke-Owa'(Owa Mountain) where the incident occurred is forbidden for anyone to climb, particularly its peak except the community’s monarch, the Olujare of Ijare.

He also disclosed that it was not the first time such is happening in the community to those who desecrate the sacred mountain.

According to Olaniran, “There have been occasions like that but not as massive as we are having it now. Some individuals who desecrated the land in the past did witness a thunderbolt attack. When you desecrated any part of Ijare particularly the sacrifice places, the grove the person will see the repercussion.

“The place where the cows died is being called ‘Owa’ and it is normally visited once in a year by the Olujare, where he will stay for a day. He will be there for seclusion to perform some traditional rites and no individuals are allowed to go to that place.

“Five days before this time, we learnt that Fulani men were there and they were carrying wood to build their tent and we said that are they taking over the land from us, and we pray to God to save us, to intervene because we don’t want anything to desecrate the place it is a very special place as far as Ijare community is concerned.

“No implication, it is a sign that the gods that are there don’t want whosoever to move to that place and settled down there. It is not meant for any ordinary person even Kabiesi himself goes there once in a year and there is a way he will compose himself when he is there.

“One unforgettable incident that happened there was that one Olujare went there and he couldn’t return, so we don’t encourage people to mount that hill and nobody can touch the dead cows, even Fulani people that we met there said it was thunderbolt attack they even told us that if we see anybody that has interest should go there and take away the cows and we said no that it is a taboo for anybody to touch anything there.

“The dead cows will be there forever. It is part of the history in our land for people to see as testimony in the future that such things happened. A whole Oba was buried there live and heaven did not fall talk less of ordinary cows.

“No casualty, when it happens I and some chiefs went to the police station to make an official report, police are aware of it even DPO came to the palace and we explained to him and he confirmed that it was thunderbolt attack that it wasn’t human being handwork.”