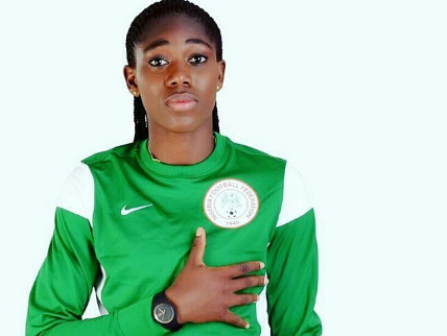 If you have heard of Asisat Oshoala, here are things you probably didn’t know about her

Did you know that the Nigerian woman is the first to play and score at the UEFA Women’s Champions League final?

This unique Nigerian professional footballer plays for Spanish Side, FC Barcelona Femení in the Primera División as a forward.

1. Asisat was named best player and was the highest goal scorer at the 2014 FIFA U-20 Women’s World Cup.

2. She was also named best player and second top goalscorer with the Super Falcons team who won the 2014 African Women’s Championship.

3. She is just 24. Yup, you read right! The young football star has only just begun.

4. Oshoala joined Liverpool Ladies, on January 23, 2015. She was so good that the Liverpool manager, Matt Beard called her “one of the best young players in the world”.

5. In September 2014, Oshoala was made a Member of the Order of the Niger by the then President of Nigeria, Goodluck Jonathan.

9. Oshoala was also a member of the Super Falcons team who won the African Women’s Championship in 2016 and 2018. She scored three goals in the 2018 Edition in Ghana.

10. While in Dalian Quanjian, Asisat Oshoala, won her 2 consecutive Chinese Women’s Premier League titles in the two years she was there.

12. Four months ago, Asisat Oshoala left Dalian Quanjian on loan deal to Spanish side, Barcelona Femení in the Primera División. During her four-months loan stay, she helped Barcelona reach the UEFA Women’s Champions League final and scored eight goals in 11 appearances. Following her impressive performance, Barcelona made the bold move to completely sign her from Dalian Quanjian and offered her a 3-year-deal.

13. Oshoala incurred the wrath of her parents when she dropped out of school to pursue a football career. Now look where she is. Out here, scoring goals, living her best life!

14. Plus you must have seen her feature in Amstel Malta’s latest campaign, “We’ve Got Balls”.