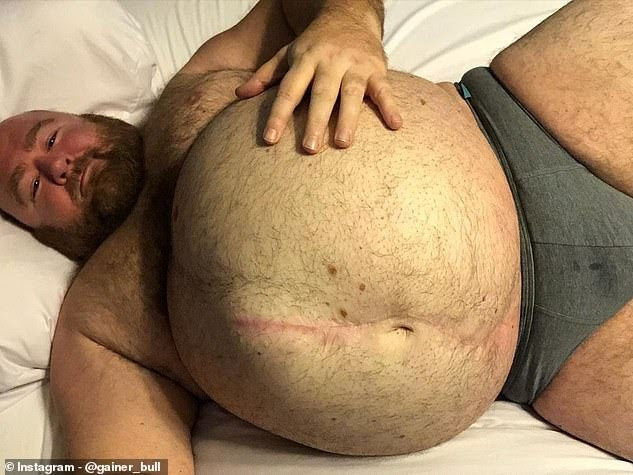 A man whose massive tummy appeals to the fat fetish community has revealed that he eats around 10,000 calories a day, to maintain his “ball gut” and keep his followers entertained.

44-year-old Bryan, who goes by the name Gainer Bull, began gaining weight more than 20 years ago and started “bulking up” his stomach.

He explained that his weight gain turned sexual as a teenager as he began to realize being bigger added to his arousal.

Speaking to Metro, he said his “loading sessions”, which he shares with his followers, involve him eating four times the standard amount of calories for an adult male and come at great expense.

On a typical day, he will eat 10,000 calories or more but says weight gain does not come easily to him.

He often has followers encouraging him to eat more to see how much weight he can add on.

He said: “It’s been years of escalating my intake and binging to increase my capacity but these days just the regular eating keeps me going though sometimes an encourager or two like to really push me to go much farther.”

Bryan used to be a slim man. However, he intentionally began putting on weight as he said he realized his body getting bigger got him excited.

Apart from OnlyFans, Bryan also has a significant following on Instragram, where he shares regular updates on the progress of his ever-growing stomach.